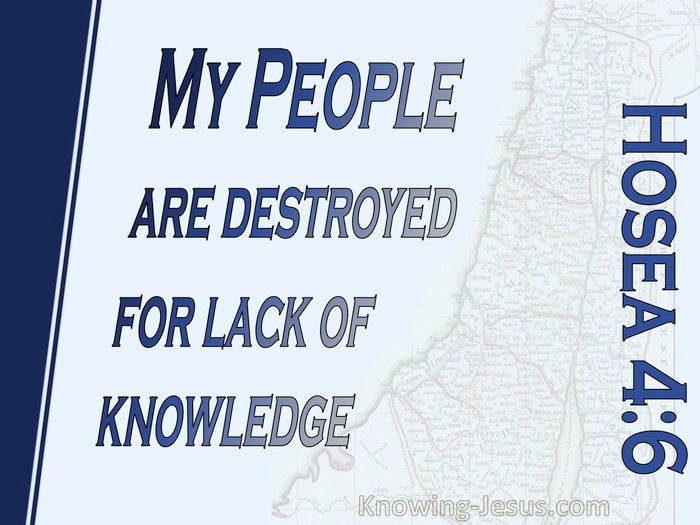 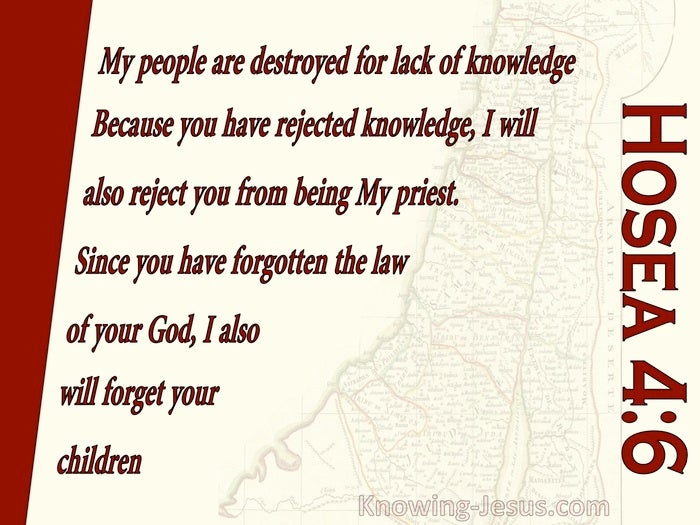 My people are destroyed for lack of knowledge: because thou hast rejected knowledge, I will also reject thee, that thou shalt be no priest to me: seeing thou hast forgotten the law of thy God, I will also forget thy children.

My people are destroyed because they lack knowledge of me. Because you rejected that knowledge, I will reject you as a priest for me. Since you forget the Law of your God, I will also forget your children.

My people are destroyed for lack of knowledge. Because thou have rejected knowledge, I also will reject thee, that thou shall be no priest to me. Since thou have forgotten the law of thy God, I also will forget thy sons.

My people are destroyed for lack of knowledge: because thou hast rejected knowledge, I will also reject thee, that thou shalt be no priest to me: seeing thou hast forgotten the law of thy God, I also will forget thy children.

Destruction has overtaken my people because they have no knowledge; because you have given up knowledge, I will give you up, so that you will be no priest to me, because you have not kept in mind the law of your God, I will not keep your children in my memory.

My people are destroyed for lack of knowledge; for thou hast rejected knowledge, and I will reject thee, that thou shalt be no priest to me; seeing thou hast forgotten the law of thy God, I also will forget thy children.

My people were cut off from not knowing: because thou didst reject knowledge and I will reject thee from being priest to me: and thou wilt forget the instructions of thy God; I will also forget thy sons, also I

My people are destroyed for lack of knowledge; because you have rejected knowledge, I reject you from acting as a priest for me. And since you have forgotten the law of your God, I will also forget your children.

My people are destroyed for lack of knowledge. Because you have rejected knowledge, I will also reject you from being priest to Me. Since you have forgotten the Law of your God, I will also forget your sons, even I.

My people perish, because they have no knowledge. Seeing then that thou hast refused understanding, therefore will I refuse thee also: so that thou shalt no more be my priest. And forsomuch as thou hast forgotten the law of thy God, I will also forget thy children.

My people, are destroyed, for lack of knowledge, - Because, thou, hast rejected knowledge, therefore will I reject thee from ministering as priest unto me, and, because thou hast forgotten the law of thy God, I also, will forget thy children.

My people are destroyed for lack of knowledge: because thou hast rejected knowledge, I will also reject thee, that thou shalt be no priest to me: seeing thou hast forgotten the law of thy God, I will also forget thy children.

Cut off have been My people for lack of knowledge, Because thou knowledge hast rejected, I reject thee from being priest to Me, And thou forgettest the law of thy God, I forget thy sons, I also!

Destruction » Why people are destroyed

Forgetting » The reward for forgetting the lord

Knowledge » The reward for lacking knowledge

Knowledge » Those who reject are destroyed

Law » The reward for ignoring the law

The law of God » The wicked » Forget

Rejection » The reward for rejecting knowledge

Rejection » Who the lord rejects

The bible » The law part of » Despised

Rejection Of God, Results Of

thee, that thou shalt be no priest
H3547
כּהן
Kahan
priest's office, decketh, office of a priest, priest
Usage: 23

to me seeing thou hast forgotten
H7911
שׁכח שׁכח
Shakach
forget, forgotten, at all
Usage: 102

The Alpha and the Omega

Word Count of 20 Translations in Hosea 4:6 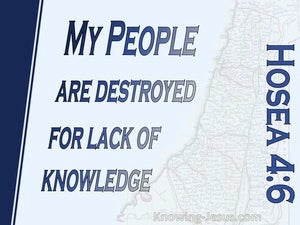 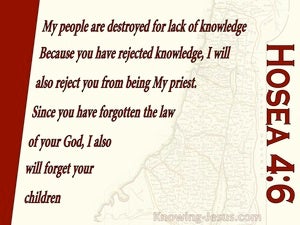 The Lord Accuses The Priests

5 You will stumble in the day, and the prophet will also stumble with you in the night; and I will destroy your mother. 6 My people are destroyed for lack of knowledge. Because you have rejected knowledge, I will also reject you, that you may be no priest to me. Because you have forgotten your God's law, I will also forget your children. 7 As they were multiplied, so they sinned against me. I will change their glory into shame.

Other Readings
Yahweh Has An Indictment

Therefore my people go into captivity for lack of knowledge. Their honorable men are famished, and their multitudes are parched with thirst.

For Israel has forgotten his Maker and built palaces; and Judah has multiplied fortified cities; but I will send a fire on his cities, and it will devour its fortresses."

The ropes of the wicked bind me, but I won't forget your Law.

It isn't good to have zeal without knowledge; nor being hasty with one's feet and missing the way.

The ox knows his owner, and the donkey his master's crib; but Israel doesn't know, my people do not consider.

For you have forgotten the God of your salvation, and have not remembered the rock of your strength. Therefore you plant pleasant plants, and set out foreign seedlings.

Hear the word of the LORD, you children of Israel; for the LORD has a charge against the inhabitants of the land: "Indeed there is no truth, nor goodness, nor knowledge of God in the land.

According to their pasture, so were they filled; they were filled, and their heart was exalted. Therefore they have forgotten me.

I cut off the three shepherds in one month; for my soul was weary of them, and their soul also loathed me.

The LORD said to me, "Take for yourself yet again the equipment of a foolish shepherd.

Now the sons of Eli were base men; they did not know the LORD.

And I chose him out of all the tribes of Israel to be my priest, to go up to my altar, to burn incense, to wear an ephod before me. And I gave to the house of your father all the offerings of the children of Israel made by fire.

In that day I will perform against Eli all that I have spoken concerning his house, from the beginning even to the end.

They forsook all the commandments of the LORD their God, and made them molten images, even two calves, and made an Asherah, and worshiped all the host of heaven, and served Baal.

My zeal wears me out, because my enemies ignore your words.

They wanted none of my counsel. They despised all my reproof.

When its boughs are withered, they will be broken off. The women will come and set them on fire, for they are a people of no understanding. Therefore he who made them will not have compassion on them, and he who formed them will show them no favor.

Assemble yourselves and come. Draw near together, you who have escaped from the nations. Those have no knowledge who carry the wood of their engraved image, and pray to a god that can't save.

His watchmen are blind, they are all without knowledge; they are all mute dogs, they can't bark; dreaming, lying down, loving to slumber.

The priests did not say, 'Where is the LORD?' And those who handle the law did not know me. The rulers also transgressed against me, and the prophets prophesied by Baal, and walked after things that do not profit.

Yes, the stork in the sky knows her appointed times; and the turtledove and the swallow and the crane observe the time of their coming; but my people do not know the LORD's law.

I will visit on her the days of the Baals, to which she burned incense, when she decked herself with her earrings and her jewels, and went after her lovers, and forgot me," says the LORD.

My people consult with their wooden idol, and answer to a stick of wood. Indeed the spirit of prostitution has led them astray, and they have been unfaithful to their God.

For I desire mercy, and not sacrifice; and the knowledge of God more than burnt offerings.

"Put the trumpet to your lips. Something like an eagle is over the LORD's house, because they have broken my covenant, and rebelled against my law.

I wrote for him the many things of my law; but they were regarded as a strange thing.

"Now, you priests, this commandment is for you.

For the priest's lips should keep knowledge, and they should seek the law at his mouth; for he is the messenger of the LORD of hosts.

And he answered them, "Why do you also disobey the commandment of God because of your tradition?

'These people honor me with their lips; but their heart is far from me.

They told him, "He will miserably destroy those miserable men, and will lease out the vineyard to other farmers, who will give him the fruit in its season."

They took him, killed him, and cast him out of the vineyard.

He will come and destroy these farmers, and will give the vineyard to others." When they heard it, they said, "May it never be."

Even if our Good News is veiled, it is veiled to those who are perishing;

But if they do not listen, they shall perish by the sword; they shall die without knowledge.