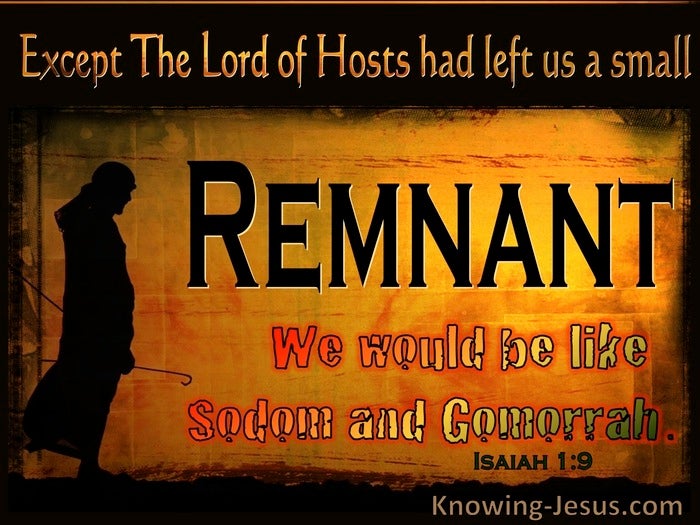 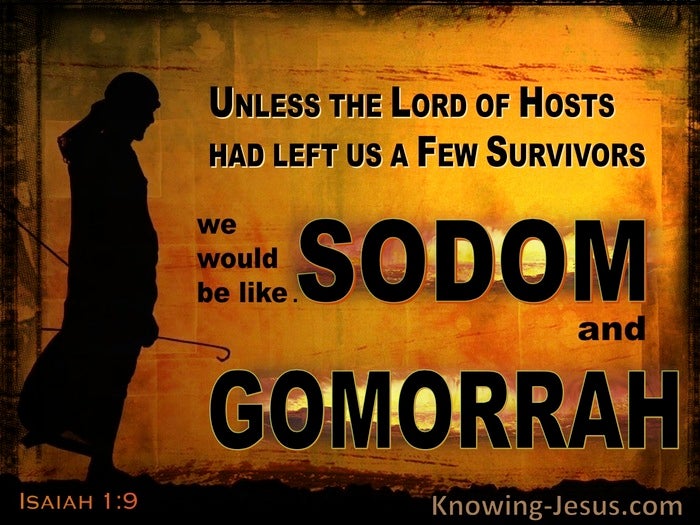 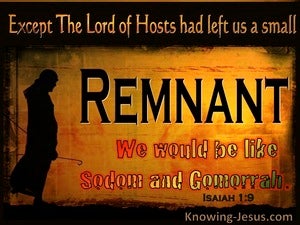 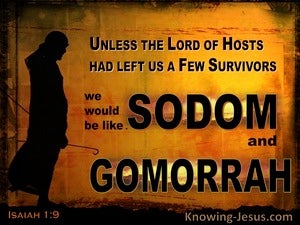 8 The daughter of Zion is left like a shelter in a vineyard, like a hut in a field of melons, like a besieged city. 9 Unless Yahweh of Armies had left to us a very small remnant, we would have been as Sodom; we would have been like Gomorrah. 10 Hear the word of Yahweh, you rulers of Sodom! Listen to the law of our God, you people of Gomorrah!

Then Yahweh rained on Sodom and on Gomorrah sulfur and fire from Yahweh out of the sky.

As Isaiah has said before, "Unless the Lord of Armies had left us a seed, we would have become like Sodom, and would have been made like Gomorrah."

It may be Yahweh your God will hear the words of Rabshakeh, whom the king of Assyria his master has sent to defy the living God, and will rebuke the words which Yahweh your God has heard. Therefore lift up your prayer for the remnant that is left.'"

The remnant that is escaped of the house of Judah will again take root downward, and bear fruit upward.

[It is of] Yahweh's loving kindnesses that we are not consumed, because his compassion doesn't fail.

Yahweh said, "If I find in Sodom fifty righteous within the city, then I will spare all the place for their sake."

He said, "Oh don't let the Lord be angry, and I will speak just once more. What if ten are found there?" He said, "I will not destroy it for the ten's sake."

[and that] the whole land of it is sulfur, and salt, [and] a burning, [that] it is not sown, nor bears, nor any grass grows therein, like the overthrow of Sodom and Gomorrah, Admah and Zeboiim, which Yahweh overthrew in his anger, and in his wrath:

Yet will I leave seven thousand in Israel, all the knees which have not bowed to Baal, and every mouth which has not kissed him."

If there is a tenth left in it, that also will in turn be consumed: as a terebinth, and as an oak, whose stock remains when they are felled; so the holy seed is its stock."

It will come to pass in that day that the remnant of Israel, and those who have escaped from the house of Jacob will no more again lean on him who struck them, but shall lean on Yahweh, the Holy One of Israel, in truth.

Yet gleanings will be left there, like the shaking of an olive tree, two or three olives in the top of the uppermost bough, four or five in the outermost branches of a fruitful tree," says Yahweh, the God of Israel.

For it will be so in the midst of the earth among the peoples, as the shaking of an olive tree, as the gleanings when the vintage is done.

For the iniquity of the daughter of my people is greater than the sin of Sodom, That was overthrown as in a moment, and no hands were laid on her.

Yet will I leave a remnant, in that you shall have some that escape the sword among the nations, when you shall be scattered through the countries.

It will happen that whoever will call on the name of Yahweh shall be saved; for in Mount Zion and in Jerusalem there will be those who escape, as Yahweh has said, and among the remnant, those whom Yahweh calls.

"I have overthrown some of you, as when God overthrew Sodom and Gomorrah, and you were like a burning stick plucked out of the fire; yet you haven't returned to me," says Yahweh.

Therefore as I live, says Yahweh of Armies, the God of Israel, surely Moab will be as Sodom, and the children of Ammon as Gomorrah, a possession of nettles, and salt pits, and a perpetual desolation. The remnant of my people will plunder them, and the survivors of my nation will inherit them.

It shall happen that in all the land," says Yahweh, "two parts in it will be cut off and die; but the third will be left in it.

How narrow is the gate, and restricted is the way that leads to life! Few are those who find it.

but in the day that Lot went out from Sodom, it rained fire and sulfur from the sky, and destroyed them all.

Isaiah cries concerning Israel, "If the number of the children of Israel are as the sand of the sea, it is the remnant who will be saved;

But how does God answer him? "I have reserved for myself seven thousand men, who have not bowed the knee to Baal."

and turning the cities of Sodom and Gomorrah into ashes, condemned them to destruction, having made them an example to those who would live ungodly;