The Word [already] existed in the beginning [of time]. [Note: This is a reference to the preexistence of Jesus. See verse 14]. And the Word was with God and the Word was [what] God [was].

From the first he was the Word, and the Word was in relation with God and was God.

Christ » Heal persecution of » Testimony of the apostles

Christ » Word, the » Name applied to

Jesus Christ, Deity Of » As eternal

Jesus Christ, Deity Of » As God the word

Creation » Everything being created by the word of God (jesus Christ)

Divinity » Of Christ » Testimony of the apostles

Glory of Christ » As God

Life » The lord being the creator of all life

Rebirth/being born again » Who is born of God

Receiving » Those that receive jesus Christ

Receiving » Who did not receive jesus Christ

Word » A title of jesus

World » The lord creating the world

The Existence Of Christ

The Word Of God

The Body of Christ

The Mystery of Christ

John, The Epistles of

Versions of the Scripture, English

Word Count of 37 Translations in John 1:1 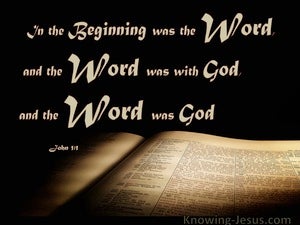 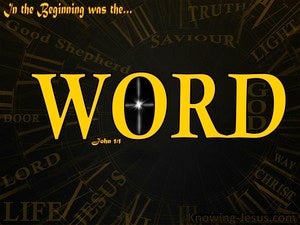 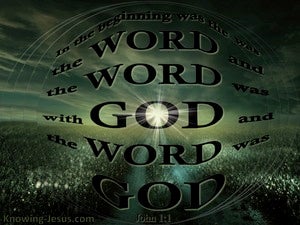 The Prologue To John's Gospel

And now, honour thou me, O Father, with thyself, with the honour which I had with thee before the world was.

In the beginning God formed the heavens and the earth.

Who, being in the form of God, thought not robbery to be equal to God

And he is before all, and all things have been established by him.

I am the Alpha and the Omega, the beginning and the end, says the Lord, who being, and who was, and who coming, the Omnipotent Ruler.

And surrounded with a garment dipped in blood: and his name is called The Word of God.

Jehovah set me up the beginning of his way, before his works from ancient time.

For a child was born to us, a son was given to us, and the dominion shall be upon his shoulder, and his name shall be called, Wonderful, Counsellor, Mighty God, everlasting Father, Captain of Peace.

Behold, the virgin shall be with child, and shall bring forth a son, and they shall call his name Emmanuel, which is, being interpreted, God with us.

And the Word was flesh, and dwelt with us, (and we beheld his glory, as the glory of the only born of the Father,) full of grace and truth.

For three are testifying (in heaven, the Father, the Word, and the Holy Spirit: and these three are one.

I am Alpha and Omega, the beginning and the end, the first and the last.

For this, Jehovah he will give to you a sign Behold, the virgin conceiving, and she will bare a son, and call his name Immanuel.

This was in the beginning with God

None has seen God at any time; the only born Son, he being in the bosom of the Father, he has declared.

And Thomas answered and said to him, My Lord and my God.

Whose the fathers, and from whom Christ according to the flesh, who being God over all, praised forever. Amen.

And manifestly great is the mystery of devotion: God was manifested in the flesh, was justified in the Spirit, was seen by angels, was proclaimed in the nations, was believed on in the world, was received up in glory.

Expecting the blessed hope, and apppearance of the glory of the great God and our Saviour Jesus Christ;

Jesus Christ, yesterday, and to day the same, and for ever.

Simon Peter, servant and sent of Jesus Christ, to them having received by inheritance equally honoured faith with us in the justice of our God and Saviour Jesus Christ:

And we know that the Son of God has come, and has given us understanding, and we know him true, and we are in him true, in his Son Jesus Christ. This is the true God, and eternal life.

And he said to me, It has been. I am the Alpha and the Omega, the beginning and the end. I will give to him thirsting of the fountain of the water of life gratuitously.

Thy throne, O God, forever and ever: a rod of straightness the rod of thy kingdom.

I and my Father are one.

And to enlighten all what the distribution of the mystery, concealed from times immemorial in God, having created all things by Jesus Christ:

And to the Son, Thy throne, O God, for the time of time: a rod of uprightness the rod of thy kingdom.

Without father, without mother, of unknown origin, neither having beginning of days, nor end of life; and likened to the Son of God;) remains a priest perpetually.

Who bare witness to the word of God, and to the testimony of Jesus Christ, as much as he saw.

I am the Alpha and the Omega, the first and the last: and, What thou seest, write in a book, and send to the seven churches which in Asia; to Ephesus, and to Smyrna, and to Pergamos, and to Thyatira, and to Sardis, and to Philadelphia, and to Laodicea.

And when I saw him, I fell at his feet as dead. And he put his right hand upon me, saying to me, Be not afraid;I am the the first and the last:

And to the messenger of the church of the Smyrnians write; Thus says the first and the last, who was dead and he lived;

And to the angel of the church of the Laodiceans write; Thus says the Amen, the faithful and true witness, the beginning of the creation of God;

I came forth from the Father, and have come into the world: again, I leave the world, and go to the Father.