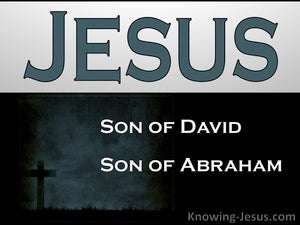 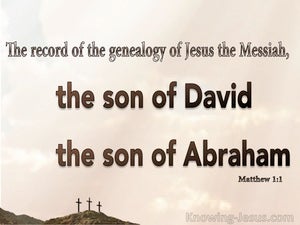 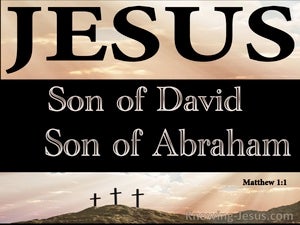 1 The Lineage Roll of Jesus Christ, - Son of David, Son of Abraham. 2 Abraham begat Isaac, and Isaac begat Jacob, and Jacob, begat Judah and his brethren;

So shall all the nations of the earth bless themselves in thy seed, - Because thou didst hearken unto my voice.

But there shall come forth a shoot from the stock of Jesse, - And, a sprout from his roots, shall bear fruit; And the spirit of Yahweh shall rest upon him, -

Concerning his Son, - who came to be of the seed of David, according to flesh,

Yahweh hath sworn unto David, in faithfulness, will he not turn from it, - Of the fruit of thy body, will I seat on thy throne.

Lo! days are coming, Declareth Yahweh, when I will raise up to David A righteous Bud, And he shall reign as king, and prosper, And shall execute justice and righteousness in the land.

I, Jesus, have sent my messenger, to bear witness unto you of these things, for the assemblies. I, am the Root and the Offspring of David, the bright and the morning Star.

That I may bless them who bless thee, But him who maketh light of thee, will I curse, - So shall be, blessed in thee, all the families of the ground.

For, A Child, hath been born to us, A Son, hath been given to us, And the dominion is upon his shoulder, - And his Name hath been called Wonderful Counsellor, Mighty GOD, Father of Futurity, Prince of Prosperity.

By constraint and by sentence, was he taken away, And of his age, who considered That he was cut off out of the land of the living, For my peoples transgression, did the stroke fall on him?

Hath not the Scripture said: Of the seed of David, and from Bethlehem, the village where David was, cometh the Christ?

These are the geneses of the heavens and the earth when they were created, - in the day when Yahweh God made earth and heavens.

Sojourn in this land, that I may be with thee and bless thee, - for, to thee, and to thy seed, will I give all these lands, So will I establish the oath which I sware to Abraham thy father;

and lo! Yahweh, standing by him, - and he said, I, am Yahweh, God of Abraham thy father and God of Isaac, - The land whereon, thou, art lying, to thee, will I give it and to thy seed;

And it shall be that, when thy days shall be fulfilled, and thou shalt sleep with thy fathers, then will I raise up thy seed after thee, which proceedeth from thine own body, - and I will establish his kingdom.

And, as Jesus, was passing aside from thence, there followed him, two blind men, crying aloud and saying, - Have mercy on us, O Son of David!

And 1o! thou shalt conceive in thy womb, and bring forth a son, and shalt call his name, Jesus:

And, Jesus himself, was, when he began, about thirty years of age, being the son, as was supposed - of Joseph, of Heli:

Being then, a prophet, and knowing that, with an oath, God had sworn unto him, of the fruit of his loins, to seat on his throne,

This, is the record of the generations of Adam. In the day when God created man, In the likeness of God, made he him:

His seed, age-abidingly, shall remain, And, his throne, be like the sun before me;

In those days and at that time, will I cause to bud unto David A Bud of righteousness, - And he shall execute justice and righteousness in the land:

The seed of Jacob also and of David my servant, might I east off so as not to take of his seed as rulers unto the seed of Abraham, Isaac and Jacob, - For I will bring back them of their captivity, and will have compassion upon them.

In that day, will I raise up the pavilion of David, that is lying prostrate, - and wall up the breaches of them, and, his ruins, will I raise up, and will build it, as in the days of age-past times:

In that day, will Yahweh, throw a covering, around the inhabitant of Jerusalem, so shall the tottering among them, in that day, become like David, - and the house of David - like God, like the messenger of Yahweh, before them.

Now the birth, of Jesus Christ, was, thus: His mother Mary having been betrothed to Joseph, - before they came together, she was found with child by the Holy Spirit.

Now, when, Jesus, was born in Bethlehem of Judaea, in the days of Herod the king, lo! wise men from eastern parts, came into Jerusalem:

And Jesus, having been immersed, straightway, went up from the water, - and lo! the heavens were opened and he saw the Spirit of God, descending like a dove coming upon him;

And lo! a Canaanite woman, from those bounds, coming forth, began crying out, saying, Have mercy on me, Lord, Son of David! My daughter, is miserably demonized.

How, to you, doth it seem, concerning the Christ? Whose son, is he? They say unto him - David's.

And hath raised up a horn of salvation for us, In the house of David his servant:

And, setting him aside, raised up, David, unto them for king, - of whom he also said, bearing witness - I have found David, the son of Jesse, - a manaccording to my heart, who will do all my will.

For, not through means of law, doth the promise belong unto Abraham or unto his seed, - that he should be heir of thee world; but, through a righteousness by faith.

Whose are the fathers, and of whom is the Christ - according to the flesh - he who is over all, God, blessed unto the ages. Amen.