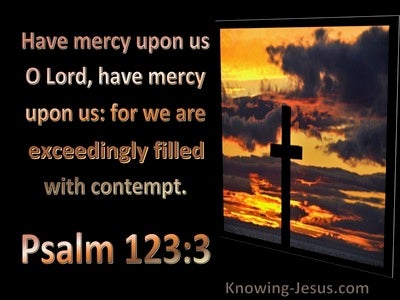 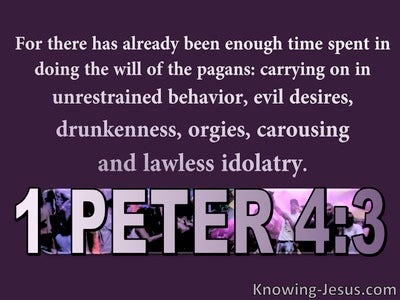 But others jeered [and] said, "They are full of sweet new wine!"

But they were mocking the messengers of God and despising his words and scoffing at his prophets until the wrath of Yahweh rose against his people until there was no remedy.

But I [am] a worm and not a man, scorned by humankind and despised by people. All [who] see me mock me. They open wide [their] lips; they shake [the] head, [saying]: "{He trusts Yahweh}. Let him rescue him. Let him deliver him because he delights in him."

Because on account of you I have borne reproach; disgrace has covered my face. I have become a stranger to my brothers and a foreigner to my mother's sons, because the zeal for your house has consumed me, and the reproaches of those reproaching you have fallen on me.read more.
When I wept in the fasting of my soul, it became reproaches for me. When I made sackcloth my clothing, I became for them a byword. Those sitting at [the] gate talk about me [as] also [the] songs of [the] drunkards.

You have persuaded me, Yahweh, and I was persuaded. You have overpowered me, and you have prevailed. I have become a laughingstock all day [long]. {Everyone} [is] mocking me.

Now it happened when Sanballat heard that we were building the wall, [he] became angry and greatly provoked, and he mocked the Jews. Then he said before his brothers and the army of Samaria, "What are the feeble Jews doing? Will they restore [these things] for themselves? Will they sacrifice? Will they finish it in a day? Will they revive the stones from the piles of rubble--even those burned up?" Tobiah the Ammonite was beside him and said, "Their wall of stone that they are building would break down if a fox went on it!"read more.
Hear, our God, for we are despised. Turn their scorn on their head and give them over to plunder in the land of captivity.

with respect to which they are surprised [when] you do not run with [them] into the same flood of dissipation, [and so they] revile [you].

Blessed are you when they insult you and persecute [you] and say all kinds of evil things against you, lying on account of me.

Now [when they] heard about the resurrection of the dead, [some] scoffed, but [others] said, "We will hear you about this again also."

And [when] they resisted and reviled [him], he shook out [his] clothes [and] said to them, "Your blood [be] on your [own] heads! I [am] guiltless! From now on I will go to the Gentiles!"

'I know your affliction and poverty (but you are rich), and the slander of those {who call themselves Jews} and are not, but [are] a synagogue of Satan.