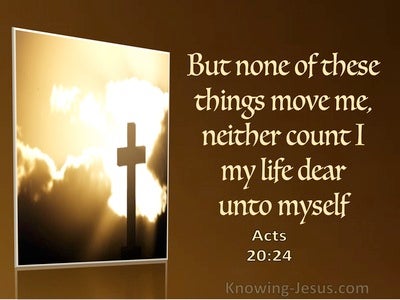 So Joseph’s master took him and put him into the jail, the place where the king’s prisoners were confined; and he was there in the jail. But the Lord was with Joseph and extended kindness to him, and gave him favor in the sight of the chief jailer. The chief jailer committed to Joseph’s charge all the prisoners who were in the jail; so that whatever was done there, he was responsible for it.read more.
The chief jailer did not supervise anything under Joseph’s charge because the Lord was with him; and whatever he did, the Lord made to prosper.

He sent a man before them,
Joseph, who was sold as a slave.
They afflicted his feet with fetters,
He himself was laid in irons;
Until the time that his word came to pass,
The word of the Lord tested him.

choosing rather to endure ill-treatment with the people of God than to enjoy the passing pleasures of sin,

So Samuel told him everything and hid nothing from him. And he said, “It is the Lord; let Him do what seems good to Him.”

When I heard these words, I sat down and wept and mourned for days; and I was fasting and praying before the God of heaven.

Then Job arose and tore his robe and shaved his head, and he fell to the ground and worshiped. He said,
“Naked I came from my mother’s womb,
And naked I shall return there.
The Lord gave and the Lord has taken away.
Blessed be the name of the Lord.” Through all this Job did not sin nor did he blame God.

So Nathan went to his house.Then the Lord struck the child that Uriah’s widow bore to David, so that he was very sick. David therefore inquired of God for the child; and David fasted and went and lay all night on the ground. The elders of his household stood beside him in order to raise him up from the ground, but he was unwilling and would not eat food with them.read more.
Then it happened on the seventh day that the child died. And the servants of David were afraid to tell him that the child was dead, for they said, “Behold, while the child was still alive, we spoke to him and he did not listen to our voice. How then can we tell him that the child is dead, since he might do himself harm!” But when David saw that his servants were whispering together, David perceived that the child was dead; so David said to his servants, “Is the child dead?” And they said, “He is dead.” So David arose from the ground, washed, anointed himself, and changed his clothes; and he came into the house of the Lord and worshiped. Then he came to his own house, and when he requested, they set food before him and he ate. Then his servants said to him, “What is this thing that you have done? While the child was alive, you fasted and wept; but when the child died, you arose and ate food.” He said, “While the child was still alive, I fasted and wept; for I said, ‘Who knows, the Lord may be gracious to me, that the child may live.’ But now he has died; why should I fast? Can I bring him back again? I will go to him, but he will not return to me.”

And now, behold, bound by the Spirit, I am on my way to Jerusalem, not knowing what will happen to me there, except that the Holy Spirit solemnly testifies to me in every city, saying that bonds and afflictions await me. But I do not consider my life of any account as dear to myself, so that I may finish my course and the ministry which I received from the Lord Jesus, to testify solemnly of the gospel of the grace of God.

Then Paul answered, “What are you doing, weeping and breaking my heart? For I am ready not only to be bound, but even to die at Jerusalem for the name of the Lord Jesus.”

when we are slandered, we try to conciliate; we have become as the scum of the world, the dregs of all things, even until now.

Then they said to one another, “Truly we are guilty concerning our brother, because we saw the distress of his soul when he pleaded with us, yet we would not listen; therefore this distress has come upon us.”

Now do not be grieved or angry with yourselves, because you sold me here, for God sent me before you to preserve life.

He humbled you and let you be hungry, and fed you with manna which you did not know, nor did your fathers know, that He might make you understand that man does not live by bread alone, but man lives by everything that proceeds out of the mouth of the Lord.

because your heart was tender and you humbled yourself before the Lord when you heard what I spoke against this place and against its inhabitants that they should become a desolation and a curse, and you have torn your clothes and wept before Me, I truly have heard you,” declares the Lord.

But Hezekiah gave no return for the benefit he received, because his heart was proud; therefore wrath came on him and on Judah and Jerusalem. However, Hezekiah humbled the pride of his heart, both he and the inhabitants of Jerusalem, so that the wrath of the Lord did not come on them in the days of Hezekiah.

When he was in distress, he entreated the Lord his God and humbled himself greatly before the God of his fathers.

“While I was fainting away,
I remembered the Lord,
And my prayer came to You,
Into Your holy temple.

Luke 15:21
Verse Concepts
We Have SinnedBeing A Good FatherRepentance, Examples Of
Conviction Of SinGuilt, Human Aspects Of

And the son said to him, ‘Father, I have sinned against heaven and in your sight; I am no longer worthy to be called your son.’