7 Bible Verses about Atheism, Evidence Against 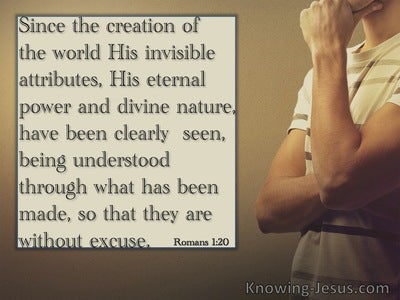 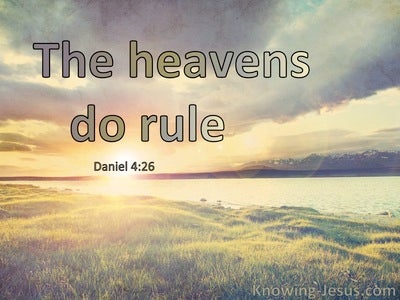 The heavens [are] telling the glory of God, and the firmament proclaims the work of his hands. {Every day} [they] pour forth speech, and {every night} [they] tell knowledge. There is no speech and there are no words; their sound is inaudible.

And yet he did not leave himself without witness [by] doing good, giving you rain from heaven and fruitful seasons, satisfying [you] with food and your hearts with gladness."

because what can be known about God is evident among them, for God made [it] clear to them. For from the creation of the world, his invisible [attributes], both his eternal power and deity, are discerned clearly, being understood in the things created, so that they are without excuse.

This [is] the explanation, O king, and it [is] a decree of the Most High that has come upon my lord the king: you will be driven away {from human society} and {you will dwell} with the animals of the field, and you will be caused to graze grass like the oxen {yourself}, and you will be watered with the dew of heaven, and seven [periods of] time will pass over you until that you have acknowledged that the Most High [is] sovereign over the kingdom of humankind, and {to whom he wills} he gives it. {And in that} they said to leave alone the stump of the tree's root, so your kingdom [will be] restored for you {when} you acknowledge that heaven [is] sovereign.read more.
Therefore, O king, let my advice be acceptable [to you] and your sin remove with righteousness and your iniquity with having mercy on [the] oppressed, {in case there might be a prolongation of your prosperity}.'" {All this happened} to Nebuchadnezzar the king. At the end of twelve months he was walking on the [roof of] {the royal palace} of Babylon. And the king answered and said, "Is this not the great Babylon which I have built as a royal palace by the strength of my own power, and for the glory of my own majesty?" [While] the words [were] still in the mouth of the king, a voice from heaven came, [saying], 'To you, King Nebuchadnezzar, [it] is declared that the kingdom has departed from you, and you will be driven away from {human society} and your dwelling [will be] with the animals of the field and they will cause you to graze [the] grass like oxen, and seven times will pass over you, until you acknowledge that the Most High [is] sovereign over the kingdom of humankind and that he gives it to whom he wills.' {Immediately} the word was fulfilled {concerning} Nebuchadnezzar, and he was expelled from {human society} and he ate grass like oxen, and his body was bathed with the dew of heaven until his hair [was] like [the hair of] an eagle and his nails grew like bird's [claws]. "But at the end of {that period}, I, Nebuchadnezzar, lifted up my eyes to heaven, and [then] my reason returned to me; and I blessed the Most High and {the one who lives forever} I praised and I honored. "For his sovereignty [is] [an] everlasting sovereignty, and his kingdom [continues] from generation to generation. And all the dwellers of the earth are regarded as nothing, and he does {according to} his desire in the host of heaven and [among] the dwellers of earth, and there is not [one] who can hold back his hand, or {ask him}, 'What are you doing?' "{At that time} my reason returned to me, and [also] the glory of my kingdom and my majesty and splendor returned to me, and my advisers and my lords searched [me] out, and I was established over my kingdom and abundant greatness was added to me. Now I, Nebuchadnezzar, praise and exalt and honor the king of heaven, for all his works [are] truth, and his ways [are] justice and that he is able to humble those who walk in pride."

so that they may see and know, and take to heart and understand together that the hand of Yahweh has done this, and the holy one of Israel has created it." "Present your legal case," says Yahweh. "Bring your evidence," says the king of Jacob. Let them bring [them], and let them tell us what will happen. Tell us what the former things [are] {so that} we may take [them to] our heart and know their outcome. Declare to us the things to come;read more.
tell [us] the things coming {hereafter}, that we may know that you [are] gods. Indeed, do good or do evil, that we may be afraid and see together.

Remember [the] former things from {a long time ago}, for I [am] God and there is none besides [me], God and [there is] none like me, who from [the] beginning declares [the] end, and from before, [things] that have not been done, who says, 'My plan shall stand,' and, 'I will accomplish all my wishes,'