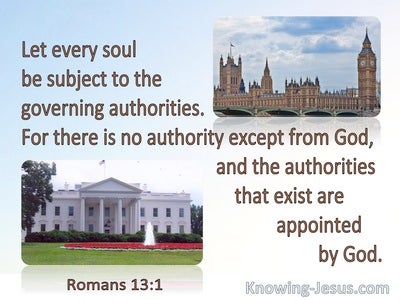 Therefore God also abandoned them in the lusts of their hearts to uncleanness, that their bodies should be dishonored among themselves, who exchanged the truth of God for a lie, and worshiped and served the creature rather than the Creator, who is blessed forever. Amen. For this reason, God abandoned them to their degrading passions. For their women changed the natural function into that which is against nature.

The LORD saw that the wickedness of man was great in the earth, and that every imagination of the thoughts of his heart was only evil continually.

In those days there was no king in Israel: every man did that which was right in his own eyes.

Let every person be subject to the governing authorities, for there is no authority except from God, and those that exist are appointed by God. Therefore he who resists the authority, withstands the ordinance of God; and those who withstand will receive to themselves judgment.

He changes the times and the seasons; he removes kings, and sets up kings; he gives wisdom to the wise, and knowledge to those who have understanding;

The sentence is by the decree of the watchers, and the demand by the word of the holy ones; to the intent that the living may know that the Most High rules in the kingdom of men, and gives it to whoever he will, and sets up over it the lowest of men.

You king, the Most High God gave Nebuchadnezzar your father the kingdom, and greatness, and glory, and majesty. And because of the greatness that he gave him, all the peoples, nations, and languages trembled and feared before him. Whom he would he killed, and whom he would he kept alive; and whom he would he raised up, and whom he would he put down. But when his heart was lifted up, and his spirit was hardened so that he dealt proudly, he was removed from his kingly throne, and they took his glory from him.read more.
And he was driven from the sons of men, and his mind was made like the animals', and his dwelling was with the wild donkeys. He was fed with grass like oxen, and his body was wet with the dew of the sky; until he knew that the Most High God rules in the kingdom of men, and that he sets up over it whomever he wants.

Subject yourselves to every ordinance of man for the Lord's sake: whether to the king, as supreme;

Thus says the LORD to his anointed, to Cyrus, whose right hand I have held, to subdue nations before him, and strip kings of their armor; to open the doors before him, and the gates shall not be shut:

behold, I will send and take all the families of the north,' says the LORD, 'and I will send to Nebuchadnezzar the king of Babylon, my servant, and will bring them against this land, and against its inhabitants, and against all these nations around; and I will utterly destroy them, and make them an astonishment, and a hissing, and perpetual desolations.

Now have I given all these lands into the hand of Nebuchadnezzar the king of Babylon, my servant; and the animals of the field also have I given him to serve him.

and tell them, 'Thus says the LORD of hosts, the God of Israel: "Behold, I will send and take Nebuchadnezzar the king of Babylon, my servant, and will set his throne on these stones that I have hidden; and he shall spread his royal pavilion over them.

For this reason you also pay taxes, for they are servants of God's service, attending continually on this very thing.

for kings and all who are in high places; that we may lead a tranquil and quiet life in all godliness and reverence.

or to governors, as sent by him for vengeance on evildoers and for praise to those who do well.

Let every person be subject to the governing authorities, for there is no authority except from God, and those that exist are appointed by God.

Tell us therefore, what do you think? Is it lawful to pay taxes to Caesar, or not?" But Jesus perceived their wickedness, and said, "Why do you test me, you hypocrites? Show me the tax money." They brought to him a denarius.read more.
He asked them, "Whose is this image and inscription?" They said to him, "Caesar's." Then he said to them, "Give therefore to Caesar the things that are Caesar's, and to God the things that are God's."

When they had come, they asked him, "Teacher, we know that you are honest, and do not defer to anyone; for you are not partial to anyone, but truly teach the way of God. Is it lawful to pay taxes to Caesar, or not? Should we pay, or should we not pay?" But he, knowing their hypocrisy, said to them, "Why do you test me? Bring me a denarius, that I may see it." They brought it. He said to them, "Whose is this image and inscription?" They said to him, "Caesar's."read more.
And Jesus said to them, "Render to Caesar the things that are Caesar's, and to God the things that are God's." They marveled greatly at him.

Therefore you need to be in subjection, not only because of the wrath, but also for conscience' sake. For this reason you also pay taxes, for they are servants of God's service, attending continually on this very thing. Give therefore to everyone what you owe: taxes to whom taxes are due; customs to whom customs; respect to whom respect; honor to whom honor.

Remind them to be in subjection to rulers and to authorities, to be obedient, to be ready for every good work,

Subject yourselves to every ordinance of man for the Lord's sake: whether to the king, as supreme; or to governors, as sent by him for vengeance on evildoers and for praise to those who do well.

My son, fear the LORD and the king. Do not join those who are rebellious:

Give therefore to everyone what you owe: taxes to whom taxes are due; customs to whom customs; respect to whom respect; honor to whom honor.

But Peter and John answered them, "Whether it is right in the sight of God to listen to you rather than to God, judge for yourselves,

But the midwives feared God, and did not do what the king of Egypt commanded them, but saved the baby boys alive.

1 Kings 21:3
Verse Concepts
Far Be It!Heirs
Land, As A Divine ResponsibilityYear Of Jubilee

Naboth said to Ahab, "May the LORD forbid me, that I should give the inheritance of my fathers to you."

But if not, be it known to you, O king, that we will not serve your gods, nor worship the golden image which you have set up."

Then they came near, and spoke before the king concerning the king's decree. "Haven't you signed a decree, that every man who shall make petition to any god or man within thirty days, except to you, O king, shall be cast into the den of lions?" The king answered, "The thing is true, according to the law of the Medes and Persians, which cannot be changed."

By faith, Moses, when he was born, was hidden for three months by his parents, because they saw that he was a beautiful child, and they were not afraid of the king's commandment.

I exhort therefore, first of all, that petitions, prayers, intercessions, and thanksgivings, be made for all men: for kings and all who are in high places; that we may lead a tranquil and quiet life in all godliness and reverence.

Seek the peace of the city where I have caused you to be carried away captive, and pray to the LORD for it; for in its peace you shall have peace.'

But when it was day, the magistrates sent the sergeants, saying, "Let those men go." The jailer reported these words to Paul, saying, "The magistrates have sent to let you go; now therefore come out, and go in peace." But Paul said to them, "They have beaten us publicly, without a trial, men who are Romans, and have cast us into prison. Do they now release us secretly? No indeed. Let them come themselves and bring us out."read more.
The sergeants reported these words to the magistrates, and they were afraid when they heard that they were Romans, and they came and begged them. When they had brought them out, they asked them to depart from the city.

They listened to him until he said that; then they lifted up their voice, and said, "Rid the earth of this fellow, for he is not fit to live." As they yelled, and threw off their cloaks, and threw dust into the air, the commanding officer commanded him to be brought into the barracks, ordering him to be examined by scourging, that he might know for what crime they yelled at him like that.read more.
When they had tied him up with thongs, Paul asked the centurion who stood by, "Is it lawful for you to scourge a man who is a Roman, and not found guilty?" When the centurion heard it, he went to the commanding officer and told him, "What are you about to do? For this man is a Roman." The commanding officer came and asked him, "Tell me, are you a Roman?" He said, "Yes." The commanding officer answered, "I bought my citizenship for a great price." Paul said, "But I was born a Roman." Immediately those who were about to examine him departed from him, and the commanding officer also was afraid when he realized that he was a Roman, because he had bound him.

Festus therefore, having come into the province, after three days went up to Jerusalem from Caesarea. Then the high priest and the principal men of the Jews informed him against Paul, and they urged him, asking a favor against him, that he would summon him to Jerusalem; plotting to kill him on the way.read more.
However Festus answered that Paul should be kept in custody at Caesarea, and that he himself was about to depart shortly. "Let them therefore," said he, "that are in power among you go down with me, and if there is anything wrong in the man, let them accuse him." When he had stayed among them more than eight or ten days, he went down to Caesarea, and on the next day he sat on the judgment seat, and commanded Paul to be brought. When he had come, the Jews who had come down from Jerusalem stood around him, bringing against him many and grievous charges which they could not prove, while he said in his defense, "Neither against the law of the Jews, nor against the temple, nor against Caesar, have I sinned at all." But Festus, desiring to gain favor with the Jews, answered Paul and said, "Are you willing to go up to Jerusalem, and be judged by me there concerning these things?" But Paul said, "I am standing before Caesar's judgment seat, where I ought to be tried. I have done no wrong to the Jews, as you also know very well. For if I have done wrong, and have committed anything worthy of death, I do not refuse to die; but if none of those things is true that they accuse me of, no one can give me up to them. I appeal to Caesar." Then Festus, when he had conferred with the council, answered, "You have appealed to Caesar. To Caesar you shall go."