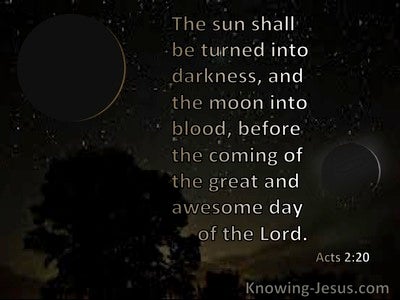 the sun shall be turned into darkness, and the moon into blood before that great and notable day of the Lord shall come;

And I saw when he had opened the sixth seal, and, behold, there was a great earthquake; and the sun became black as sackcloth of hair, and the moon became as blood;

And a certain woman, who had an issue of blood twelve years

These have power to shut the heaven, that it not rain in the days of their prophecy and have power over the waters to turn them to blood and to smite the earth with all plagues, as often as they will.

And I said unto him, lord, thou knowest. And he said to me, These are those who came out of great tribulation and have washed their long robes, and made them white in the blood of the Lamb.

And when they rose up early in the morning, and the sun shone upon the water, and the Moabites saw the water before them as red as blood; and they said, This is blood; the kings are surely slain, and they have smitten one another. Now therefore, Moab, to the spoil.