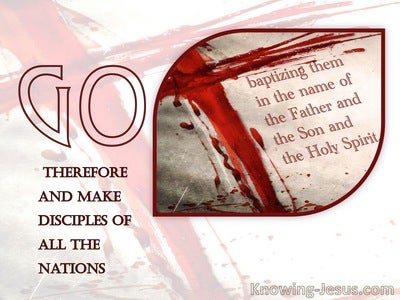 After these things Jesus and his disciples came into the land of Judaea; and there he remained with them, and baptized.

And they came to John, and said to him, Rabbi, he who was with thee beyond the Jordan, to whom thou hast borne witness, behold, he baptizeth, and all men are going to him.

John 4:1
Verse Concepts
Pharisees Concerned About ChristTelling Of JesusBaptismChrist Knowing About People
The Disciples ActionsBaptism, in the GospelsJohn The BaptistAbraham, New Testament References

When therefore Jesus knew that the Pharisees had heard that Jesus made and baptized more disciples than John,

(though Jesus himself did not baptize, but his disciples,)

Go, and make all nations my disciples, baptizing them into the name of the Father, and of the Son, and of the Holy Spirit;

And when they heard this, they were baptized into the name of the Lord Jesus.

But Peter said to them, Repent, and let every one of you be baptized to the name of Jesus Christ for forgiveness of sins, and ye will receive the gift of the Holy Spirit.

They therefore received his word, and were baptized; and there were added on that day about three thousand souls.

But when they believed Philip, publishing the glad tidings concerning the kingdom of God and the name of Jesus Christ, they were baptized, both men and women.

And as they went along the road, they came to a certain water; and the eunuch saith, See, here is water; what is there to hinder my being baptized?

And he commanded that the chariot should stop; and they both went down into the water, both Philip and the eunuch; and he baptized him.

And now why dost thou delay? Arise, and be baptized, and wash away thy sins, calling on his name.

And immediately there fell off from his eyes as it were scales; and he received sight, and arose, and was baptized.

Can any one forbid water, that these should not be baptized, who have received the Holy Spirit even as we have?

And he commanded that they should be baptized in the name of the Lord. Then they entreated him to remain some days.

And he took them with him at that hour of the night, and washed their stripes; and he was immediately baptized, himself and all that belonged to him.

And when she had been baptized, and her household, she besought us, saying, If ye have judged me to be a believer in the Lord, come into my house, and abide. And she constrained us.

And Crispus, the ruler of the synagogue, believed in the Lord with all his house; and many of the Corinthians upon hearing believed, and were baptized.

Acts 8:13
Verse Concepts
Other MiraclesSigns And Wonders Of The GospelThose Who Had Faith
potentialMiracles, Responses To

And Simon himself also believed, and having been baptized he continued with Philip, and was amazed when he beheld the miracles and signs which were wrought.

For it had not yet fallen upon any of them; but they had only been baptized into the name of the Lord Jesus.

I thank God that I baptized none of you, but Crispus and Gaius;

that no one may say that ye were baptized into my name.

And I baptized also the household of Stephanas; I am not aware that I baptized any one besides.

For Christ sent me not to baptize, but to preach the gospel; not with wisdom of speech, lest the cross of Christ should be made of no effect.

1 Corinthians 15:29
Verse Concepts
Are The Dead Raised?
Baptism, practice of