25 Bible Verses about Escaping From People 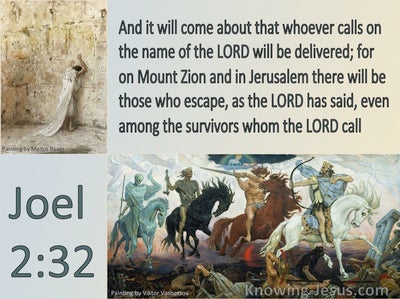 Deuteronomy 23:15
Verse Concepts
The Law On SlaveryslaverySlavery, In Ot
Handing Over PeopleFugitives

"Don't hand over a slave who escaped from his master when he runs to you.

Nabal answered David's servants: "Who is David? Who is this son of Jesse? There are many servants today who are breaking away from their masters.

And everyone who calls upon the name of the LORD will be delivered. For as the LORD has said, "In Mount Zion and in Jerusalem there will be those who escape, the survivors whom the LORD is calling.'"

By talking high-sounding nonsense and using sinful cravings of the flesh, they entice people who have just escaped from those who live in error.

Genesis 32:8
Verse Concepts
People Attacking Their Own
Survivors Of Israel

Jacob was thinking, "If Esau comes to one group and attacks it, then the remaining group may escape."

Meanwhile, Ehud escaped while they were delayed, passed by the idols, and escaped in the direction of Seirah.

Then Jotham escaped by running away. He went to Beer and remained there because of his brother Abimelech.

Saul hurled it, thinking, "I'll pin David to the wall." But David escaped from him twice.

Saul tried to pin David to the wall with the spear, but he jumped away from Saul and the spear stuck in the wall. That night David escaped and fled.

The LORD said, "They'll hand you over." David and his men, about 600 strong, got up and left Keilah. They moved around wherever they could go. Saul was advised that David had escaped from Keilah, so he stopped the campaign.

One man, Ahimelech's son Abiathar, a grandson of Ahitub, escaped and fled to David.

So Saul turned around from pursuing David and went to meet the Philistines. Therefore, they call that place the Rock of Escape.

David told himself, "One of these days I'll perish by Saul's hand. There is nothing better for me to do than to escape to Philistine territory. Saul will give up searching for me anymore within the borders of Israel, so I'll escape from him."

So David told all of his staff who were with him in Jerusalem, "Let's get up and get out of here! Otherwise, none of us will escape from Absalom. Hurry, or he'll overtake us quickly, bring disaster on all of us, and execute the inhabitants of the city!"

But Nethaniah's son Ishmael and eight other men escaped from Jonathan and went to the Ammonites.

""Come now, Zion! Escape, you who are living with the residents of Babylon.

When the jailer woke up and saw the prison doors wide open, he drew his sword and was about to kill himself, since he thought the prisoners had escaped.

David asked him, "Where did you come from? He answered him, "I just escaped from Israel's encampment."

1 Samuel 19:17
Verse Concepts
Those Who Deceived
Restraints From Killing

Then Saul told Michal, "Why did you deceive me like this and let my enemy go so he could escape?" Michal told Saul, "He told me, "Let me go or I'll kill you!'"

David escaped and fled. He came to Samuel at Ramah and told him all that Saul had done to him. Then he and Samuel went and stayed at Naioth.

David struck them down from twilight until the evening of the next day, and not one of them escaped except for 400 young men who mounted camels and fled.

Later on, as he was worshiping in the temple of his god Nisroch, Adrammelech and Sharezer killed him with a sword and fled into the territory of Ararat. Then Sennacherib's son Esarhaddon became king in his place.

The LORD provided Israel with a deliverer, so they escaped the Aramean oppression while the descendants of Israel lived in tents as they had formerly.