19 Bible Verses about Exile Of Judah To Babylon 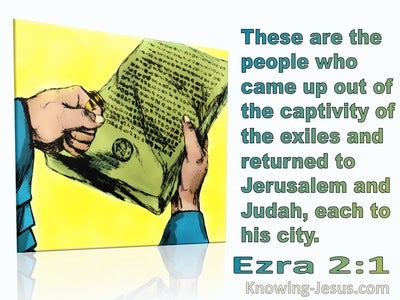 And he carried away all Jerusalem, and all the princes, and all the mighty men of valour, even ten thousand captives, and all the craftsmen and smiths: none remained, save the poorest sort of the people of the land.

Now the rest of the people that were left in the city, and the fugitives that fell away to the king of Babylon, with the remnant of the multitude, did Nebuzaradan the captain of the guard carry away.

And the king of Babylon smote them, and slew them at Riblah in the land of Hamath. So Judah was carried away out of their land.

So all Israel were reckoned by genealogies; and, behold, they were written in the book of the kings of Israel and Judah, who were carried away to Babylon for their transgression.

And them that had escaped from the sword carried he away to Babylon; where they were servants to him and his sons until the reign of the kingdom of Persia:

Ezra 2:1
Verse Concepts
Those who returned from exileReturn From Babylon
JudaismProvinces

Now these are the children of the province that went up out of the captivity, of those which had been carried away, whom Nebuchadnezzar the king of Babylon had carried away unto Babylon, and came again unto Jerusalem and Judah, every one unto his city;

And the king of Babylon smote them, and put them to death in Riblah in the land of Hamath. Thus Judah was carried away captive out of his own land.

Judah is gone into captivity because of affliction, and because of great servitude: she dwelleth among the heathen, she findeth no rest: all her persecutors overtook her between the straits.

But after that our fathers had provoked the God of heaven unto wrath, he gave them into the hand of Nebuchadnezzar the king of Babylon, the Chaldean, who destroyed this house, and carried the people away into Babylon.

These are the children of the province, that went up out of the captivity, of those that had been carried away, whom Nebuchadnezzar the king of Babylon had carried away, and came again to Jerusalem and to Judah, every one unto his city;

And Josias begat Jechonias and his brethren, about the time they were carried away to Babylon:

And after they were brought to Babylon, Jechonias begat Salathiel; and Salathiel begat Zorobabel;