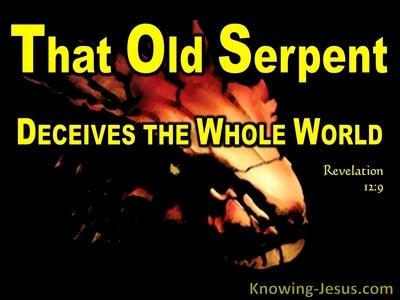 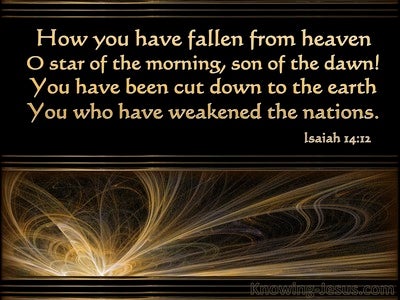 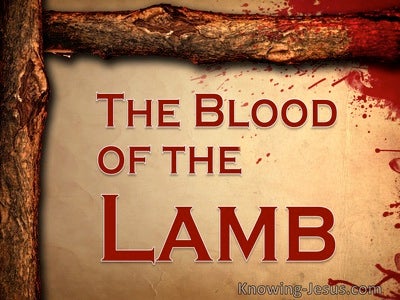 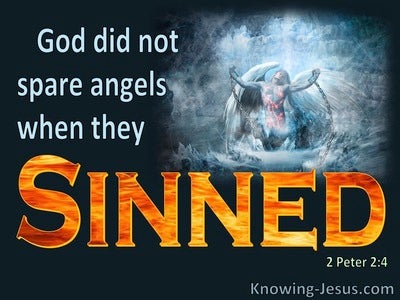 "How you have fallen from heaven, Day Star, son of the Dawn! How you have been thrown down to earth, you who laid low the nation! You said in your heart, "I'll ascend to heaven, above the stars of God. I'll erect my throne; I'll sit on the Mount of Assembly in the far reaches of the north; I'll ascend above the tops of the clouds; I'll make myself like the Most High.'read more.
But you are brought down to join the dead, to the far reaches of the Pit.

He told them, "I watched Satan falling from heaven like lightning.

Then a war broke out in heaven. Michael and his angels fought with the dragon, and the dragon and its angels fought back. But it was not strong enough, and there was no longer any place for them in heaven. The huge dragon was hurled down. That ancient serpent, called the Devil and Satan, the deceiver of the whole world, was hurled down to the earth, along with its angels.read more.
Then I heard a loud voice in heaven say, "Now the salvation, the power, the kingdom of our God, and the authority of his Messiah have come. For the one who accuses our brothers, who accuses them day and night in the presence of our God, has been thrown out. Our brothers conquered him by the blood of the lamb and by the word of their testimony, for they did not cling to their lives even in the face of death. So be glad, heavens, and those who live in them! How terrible it is for the earth and the sea, because the Devil has come down to you, filled with rage, knowing that his time is short!" When the dragon saw that it had been thrown down to the earth, it pursued the woman who had given birth to the boy. However, the woman was given the two wings of a large eagle so that she could fly away from the serpent to her place in the wilderness, where she could be taken care of for a time, times, and half a time. From its mouth the serpent spewed water like a river behind the woman in order to sweep her away with the flood. But the earth helped the woman by opening its mouth and swallowing the river that the dragon had spewed from its mouth. The dragon became angry with the woman and went away to do battle against the rest of her children, the ones who keep God's commandments and hold on to the testimony about Jesus.

For if God did not spare angels when they sinned, but threw them into the lowest hell and imprisoned them in chains of deepest darkness, holding them for judgment;

"Then he will say to those on his left, "Get away from me, you who are accursed, into the eternal fire that has been prepared for the Devil and his angels!