26 Bible Verses about Fear Of Individuals 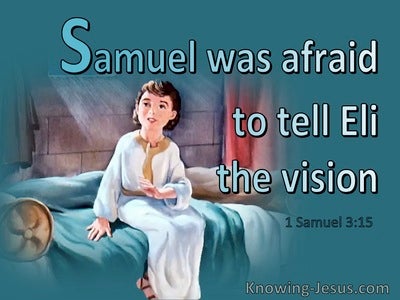 And Jacob answered and said to Laban, Because I was afraid; for I said, Peradventure thou would take by force thy daughters from me.

Genesis 43:18
Verse Concepts
Indeterminate Sums Of MoneyLoss Of Donkeys
Why People Did Things

And the men were afraid because they were brought into Joseph's house, and they said, Because of the money that was returned in our sacks the first time we are brought in here that he may seek occasion against us and fall upon us and take us for slaves and our asses.

And Joseph said unto his brethren, I am Joseph; does my father yet live? And his brethren could not answer him, for they were terrified at his presence.

Exodus 34:30
Verse Concepts
Light Of God's PeopleShining FacesFear, Caused By
Fear, Of UnknownStanding At A Distance

And when Aaron and all the sons of Israel saw Moses, behold, the skin of his face shone; and they were afraid to come near him.

1 Samuel 3:15
Verse Concepts
Those Who Did Not TellFear, Of UnknownThe Act Of Opening
Opening The TempleLying Down To Rest

And Samuel lay until the morning and opened the doors of the house of the LORD. And Samuel feared to show Eli the vision.

So Samuel called unto the LORD, and the LORD sent thunder and rain that day, and all the people greatly feared the LORD and Samuel.

And Samuel did as the LORD said and came to Bethlehem. And the elders of the town trembled at his coming and said, Comest thou peaceably?

But Saul was afraid of David because the LORD was with him and had departed from Saul.

Therefore, when Saul saw that he behaved himself very prudently, he was afraid of him.

was yet the more afraid of David; and Saul became David's enemy continually.

When Saul and all Israel heard those words of the Philistine, they were dismayed and greatly afraid.

And all the men of Israel when they saw the man fled from him and feared greatly.

And David laid up these words in his heart and was sore afraid of Achish, the king of Gath.

2 Samuel 3:11
Verse Concepts
Others Not Answering

And he could not answer Abner a word again because he feared him.

And it was told Solomon, saying, Behold, Adonijah fears King Solomon, for he has caught hold on the horns of the altar, saying, Let King Solomon swear unto me today that he will not slay his slave with the sword.

But they were exceedingly afraid and said, Behold, two kings could not stand before him; how then shall we stand?

And all Israel heard of that judgment which the king had judged, and they feared the king, for they saw that the wisdom of God was in him, to judge.

They also reported his good deeds before me and uttered my words to him. And Tobiah sent letters to put me in fear.

Then Esther said, The man who is the adversary and enemy is this wicked Haman. Then Haman was afraid before the king and the queen.

And all the princes of the provinces and the lieutenants and the captains and officers of the king helped the Jews because the fear of Mordecai fell upon them.

for Herod feared John, knowing that he was a just and holy man, and respected him; and when he heard him, he did many things and heard him gladly.

And when Saul was come to Jerusalem, he tried to join himself to the disciples; but they were all afraid of him and did not believe that he was a disciple.