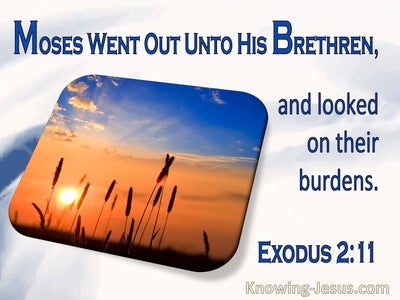 And it shall be, if it makes thee an answer of peace and opens unto thee, that all the people that are found therein shall be tributaries unto thee, and they shall serve thee.

and he saw that rest was good and the land that it was pleasant and bowed his shoulder to bear and became a servant unto tribute.

Therefore they set taskmasters over them to afflict them with their burdens. And they built the supply cities for Pharaoh: Pithom and Raamses.

And it came to pass in those days when Moses was grown, that he went out unto his brethren and looked on their burdens, and he spied an Egyptian smiting a Hebrew, one of his brethren.

Joshua 16:10
Verse Concepts
Where People Live To This DayThose Subjected To People
Not Driving Them OutSlavery, In Ot

Joshua 17:13
Verse Concepts
Not Driving Them Out

Yet it came to pass when the sons of Israel waxed strong that they put the Canaanite under tribute, but did not utterly drive them out.

And it came to pass when Israel was strong that they put the Canaanites under tribute but did not utterly drive them out.

And the Amorites desired to dwell in Mount Heres in Aijalon and in Shaalbim; yet when the hand of the house of Joseph prevailed, they made them tributaries.

And he brought forth the people that were therein and put them under saws and under harrows of iron and under axes of iron and made them pass through the brickkiln, and thus did he unto all the cities of the sons of Ammon. So David and all the people returned unto Jerusalem.

And king Solomon raised a levy out of all Israel, and the levy was thirty thousand men,

And this is the account of the levy which King Solomon raised to build the house of the LORD and his own house and Millo and the wall of Jerusalem and Hazor and Megiddo and Gezer.

their children that were left after them in the land, whom the sons of Israel were not able utterly to destroy, upon those Solomon levied a tribute of bondservice unto this day.

and Adoram was over the tribute, and Jehoshaphat, the son of Ahilud, was writer of the chronicles,

whom he sent to Lebanon, ten thousand a month by courses; they were a month in Lebanon and two months at home; and Adoniram was over the levy.

And the man Jeroboam was a mighty man of valour, and Solomon, seeing that the young man was industrious, he made him ruler over all the charge of the house of Joseph.