12 Bible Verses about Return From Babylon 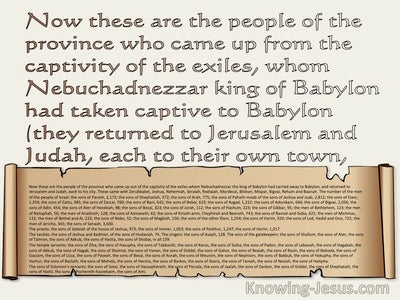 Also I said to the priests and to all these people, Thus says the Lord: Do not listen to the words of your [false] prophets who are prophesying to you, saying, Behold, the vessels of the Lord's house shall now shortly be brought back from Babylon; for they are prophesying a lie to you.

Ezra 1:11
Verse Concepts
Those who returned from exile
Five Thousand

All the vessels of gold and of silver were 5,400. All these Sheshbazzar [the governor] brought with the people of the captivity from Babylon to Jerusalem.

Ezra 2:1
Verse Concepts
Those who returned from exileJudaism
ProvincesExile Of Judah To Babylon

Now these are the people of the province [of Judah] who went up out of the captivity of those exiles whom Nebuchadnezzar the king of Babylon had carried away to Babylon, but who came again to Jerusalem and Judah, everyone to his own city.

These are the heads of their fathers' houses and this is the genealogy of those who went up with me from Babylonia in the reign of King Artaxerxes:

This Ezra went up from Babylon. He was a skilled scribe in the five books of Moses, which the Lord, the God of Israel, had given. And the king granted him all he asked, for the hand of the Lord his God was upon him.

Isaiah 43:14
Verse Concepts
For The Sake Of God's PeopleShips
Redemption, In OtSeafaring

Thus says the Lord, your Redeemer, the Holy One of Israel: For your sake I have sent [one] to Babylon, and I will bring down all of them as fugitives, [with] all their nobles, even the Chaldeans, into the ships over which they rejoiced.

Isaiah 48:20
Verse Concepts
Coming Out From EvilHerald
Redemption, In Ot

Go forth out of Babylon, flee from the Chaldeans! With a voice of singing declare, tell this, cause it to go forth even to the end of the earth; say, The Lord has redeemed His servant Jacob!

Flee out of the midst of Babylon, and go forth out of the land of the Chaldeans; and be as the he-goats [who serve as examples and as leaders in the flight] before the flocks.

Flee out of the midst of Babylon! Let every man save his life! Let not destruction come upon you through her [punishment for] sin and guilt. For it is the time of the Lord's vengeance; He will render to her a recompense.

Ho! Escape to Zion, you who dwell with the daughter of Babylon!

Zechariah 6:10
Verse Concepts
Those who returned from exile

Accept donations and offerings from these [as representatives of the] exiles, from Heldai, from Tobijah, and from Jedaiah, who have come from Babylon; and come the same day and go to the house of Josiah the son of Zephaniah.