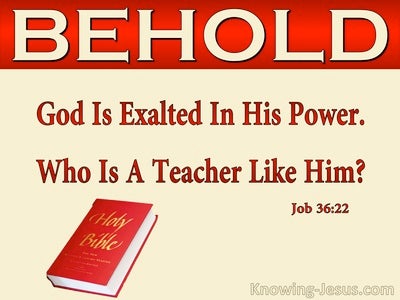 “Behold, God is exalted in His power;
Who is a teacher like Him?
“Who has appointed Him His way,
And who has said, ‘You have done wrong’?
“Remember that you should exalt His work,
Of which men have sung.
read more.
“All men have seen it;
Man beholds from afar.
“Behold, God is exalted, and we do not know Him;
The number of His years is unsearchable.
“For He draws up the drops of water,
They distill rain from the mist,
Which the clouds pour down,
They drip upon man abundantly.
“Can anyone understand the spreading of the clouds,
The thundering of His pavilion?
“Behold, He spreads His lightning about Him,
And He covers the depths of the sea.
“For by these He judges peoples;
He gives food in abundance.
“He covers His hands with the lightning,
And commands it to strike the mark.
“Its noise declares His presence;
The cattle also, concerning what is coming up. “At this also my heart trembles,
And leaps from its place.
“Listen closely to the thunder of His voice,
And the rumbling that goes out from His mouth.
“Under the whole heaven He lets it loose,
And His lightning to the ends of the earth.
“After it, a voice roars;
He thunders with His majestic voice,
And He does not restrain the lightnings when His voice is heard.

For behold, He who forms mountains and creates the wind
And declares to man what are His thoughts,
He who makes dawn into darkness
And treads on the high places of the earth,
The Lord God of hosts is His name.

and saying, “Men, why are you doing these things? We are also men of the same nature as you, and preach the gospel to you that you should turn from these vain things to a living God, who made the heaven and the earth and the sea and all that is in them. In the generations gone by He permitted all the nations to go their own ways; and yet He did not leave Himself without witness, in that He did good and gave you rains from heaven and fruitful seasons, satisfying your hearts with food and gladness.”

So Paul stood in the midst of the Areopagus and said, “Men of Athens, I observe that you are very religious in all respects. For while I was passing through and examining the objects of your worship, I also found an altar with this inscription, ‘TO AN UNKNOWN GOD.’ Therefore what you worship in ignorance, this I proclaim to you. The God who made the world and all things in it, since He is Lord of heaven and earth, does not dwell in temples made with hands;read more.
nor is He served by human hands, as though He needed anything, since He Himself gives to all people life and breath and all things; and He made from one man every nation of mankind to live on all the face of the earth, having determined their appointed times and the boundaries of their habitation, that they would seek God, if perhaps they might grope for Him and find Him, though He is not far from each one of us; for in Him we live and move and exist, as even some of your own poets have said, ‘For we also are His children.’ Being then the children of God, we ought not to think that the Divine Nature is like gold or silver or stone, an image formed by the art and thought of man. Therefore having overlooked the times of ignorance, God is now declaring to men that all people everywhere should repent, because He has fixed a day in which He will judge the world in righteousness through a Man whom He has appointed, having furnished proof to all men by raising Him from the dead.”

For the wrath of God is revealed from heaven against all ungodliness and unrighteousness of men who suppress the truth in unrighteousness, because that which is known about God is evident within them; for God made it evident to them. For since the creation of the world His invisible attributes, His eternal power and divine nature, have been clearly seen, being understood through what has been made, so that they are without excuse.read more.
For even though they knew God, they did not honor Him as God or give thanks, but they became futile in their speculations, and their foolish heart was darkened.