54 Bible Verses about Riches, Dangers Of 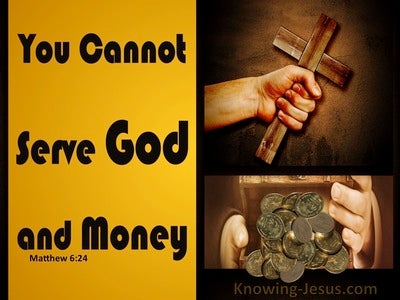 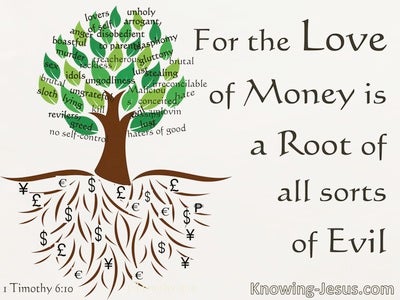 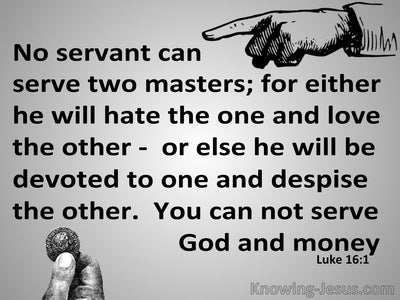 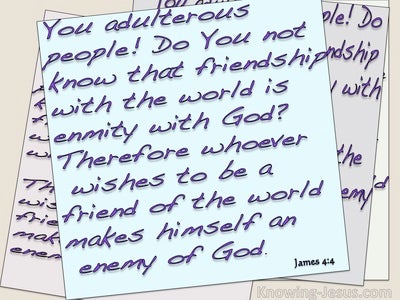 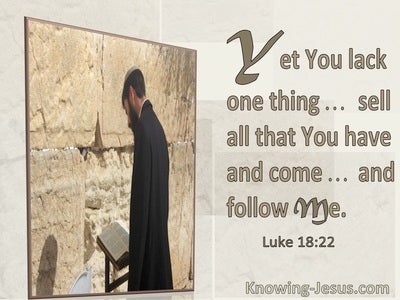 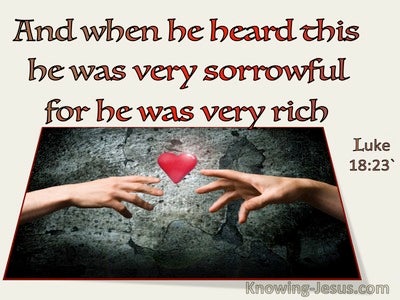 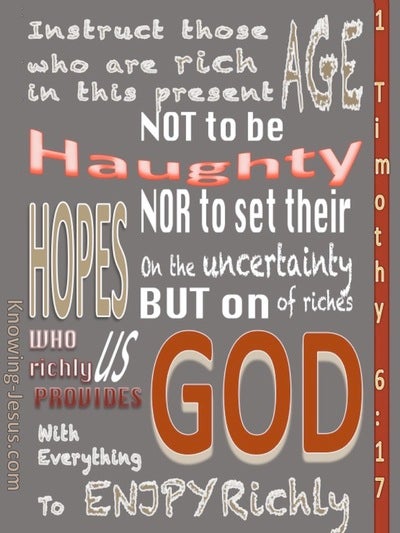 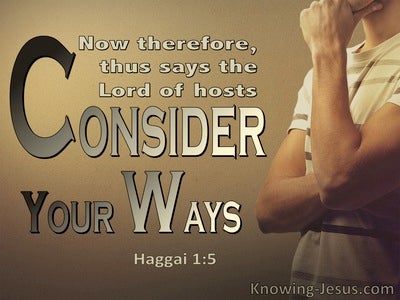 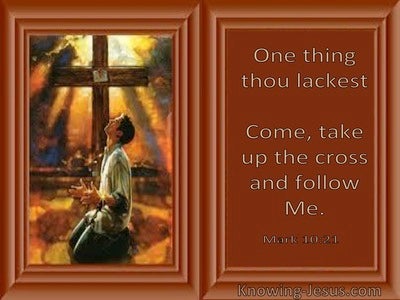 not a drunkard, not violent, but gentle, not quarrelsome, not a lover of money;

"No one can serve two masters, for either he will hate the one and love the other; or else he will be devoted to one and despise the other. You cannot serve both God and Mammon.

No servant can serve two masters, for either he will hate the one, and love the other; or else he will hold to one, and despise the other. You are not able to serve God and wealth."

And he said to him, "I will give you all of these things, if you will fall down and worship me." Then Jesus said to him, "Go away, Satan. For it is written, 'You shall worship the Lord your God, and you shall serve him only.'"

You adulteresses, do you not know that friendship with the world is enmity with God? Whoever therefore wants to be a friend of the world makes himself an enemy of God.

And what was sown among the thorns, this is he who hears the word, but the cares of the world and the deceitfulness of riches choke the word, and he becomes unfruitful.

and the cares of the age, and the deceitfulness of riches, and the lusts of other things entering in choke the word, and it becomes unfruitful.

That which fell among the thorns, these are those who have heard, and as they go on their way they are choked with cares, riches, and pleasures of life, and bring no fruit to maturity.

Jesus said to him, "If you want to be perfect, go, sell what you have, and give to the poor, and you will have treasure in heaven; and come, follow me." But when the young man heard the saying, he went away sad, for he was one who had great possessions.

Jesus looking at him loved him, and said to him, "One thing you lack. Go, sell whatever you have, and give to the poor, and you will have treasure in heaven; and come, follow me, taking up the cross." But his face fell at that saying, and he went away sorrowful, for he was one who had great possessions.

When Jesus heard it, he said to him, "You still lack one thing. Sell all that you have, and distribute it to the poor. You will have treasure in heaven. Come, follow me." But when he heard these things, he became very sad, for he was very rich.

Charge those who are rich in this present world that they not be haughty, nor have their hope set on the uncertainty of riches, but on God, who richly provides us with everything to enjoy;

"If I have made gold my hope, and have said to the fine gold, 'You are my confidence;' If I have rejoiced because my wealth was great, and because my hand had gotten much; if I have seen the sun when it shined, or the moon moving in splendor,read more.
and my heart has been secretly enticed, and my hand threw a kiss from my mouth, this also would be an iniquity to be punished by the judges; for I should have denied the God who is above.

The righteous also will see it, and fear, and laugh at him, saying, "Behold, this is the man who did not make God his strength, but trusted in the abundance of his riches, and strengthened himself in his wickedness."

He who trusts in his riches will fall, but the righteous shall flourish as the green leaf.

Why do you glory in the valleys, your flowing valley, backsliding daughter? You who trusted in her treasures, saying, "Who shall come to me?"

by your great wisdom and by your traffic you have increased your riches, and your heart is lifted up because of your riches"?

Do not trust in oppression. Do not become vain in robbery. If riches increase, do not set your heart on them.

The poor plead for mercy, but the rich answer harshly.

The rich man is wise in his own eyes; but the poor who has understanding sees through him.

Ephraim said, "Surely I have become rich, I have found myself wealth. In all my wealth they won't find in me any iniquity that is sin."

He shall not look at the rivers, the flowing streams of honey and butter. That for which he labored he shall restore, and shall not swallow it down. According to the substance that he has gotten, he shall not rejoice. For he has oppressed and forsaken the poor. He has violently taken away a house, and he shall not build it up.read more.
"Because he knew no quietness within him, he shall not save anything of that in which he delights.

In the house of the righteous is much treasure, but the income of the wicked brings trouble.

Remove far from me falsehood and lies. Give me neither poverty nor riches. Feed me with the food that is needful for me; lest I be full, deny you, and say, 'Who is the LORD?' or lest I be poor, and steal, and so dishonor the name of my God.

You shall eat and be full, and you shall bless the LORD your God for the good land which he has given you. Beware lest you forget the LORD your God, in not keeping his commandments, and his ordinances, and his statutes, which I command you this day: lest, when you have eaten and are full, and have built goodly houses, and lived therein;read more.
and when your herds and your flocks multiply, and your silver and your gold is multiplied, and all that you have is multiplied; then your heart be lifted up, and you forget the LORD your God, who brought you forth out of the land of Egypt, out of the house of bondage;

They took fortified cities, and a rich land, and possessed houses full of all good things, cisterns dug out, vineyards, and olive groves, and fruit trees in abundance. So they ate, were filled and became fat, and delighted themselves in your great goodness. "Nevertheless they were disobedient, and rebelled against you, and cast your law behind their back, and killed your prophets that testified against them to turn them again to you, and they committed awful blasphemies.

According to their pasture, so were they filled; they were filled, and their heart was exalted. Therefore they have forgotten me.

Do not weary yourself to be rich. In your wisdom, show restraint.

You have lived delicately on the earth, and taken your pleasure. You have nourished your hearts in a day of slaughter.

Then the Word of the LORD came by Haggai, the prophet, saying, "Is it a time for you yourselves to dwell in your paneled houses, while this house lies waste? Now therefore this is what the LORD of hosts says: Consider your ways.

"Woe to you, scribes and Pharisees, hypocrites. For you clean the outside of the cup and of the platter, but within they are full of extortion and self-indulgence.

"Now there was a certain rich man, and he was clothed in purple and fine linen, living in luxury every day. A certain beggar, named Lazarus, was placed at his gate, full of sores, and desiring to be fed with the crumbs that fell from the rich man's table. Yes, even the dogs came and licked his sores.

But having food and clothing, we will be content with that. But those who are determined to be rich fall into a temptation and a snare and many foolish and harmful lusts, such as drown men in ruin and destruction.

"'You shall not oppress your neighbor, nor rob him. The wages of a hired servant shall not remain with you all night until the morning.

If he be a poor man, you shall not sleep with his pledge; you shall surely restore to him the pledge when the sun goes down, that he may sleep in his garment, and bless you: and it shall be righteousness to you before the LORD your God. You shall not oppress a hired servant who is poor and needy, whether he be of your brothers, or of your foreigners who are in your land within your gates:read more.
in his day you shall give him his hire, neither shall the sun go down on it; for he is poor, and sets his heart on it: lest he cry against you to the LORD, and it be sin to you.

Whoever oppresses the poor for his own increase and whoever gives to the rich, both come to poverty.

Your rulers are rebellious, and companions of thieves. Everyone loves bribes, and follows after rewards. They do not judge the fatherless, neither does the cause of the widow come to them.

Woe to him who builds his house by unrighteousness, and his rooms by injustice; who uses his neighbor's service without wages, and doesn't give him his hire;

Her rich men are full of violence, her inhabitants speak lies, and their tongue is deceitful in their speech.

But you have dishonored the poor man. Do not the rich oppress you, and personally drag you before the courts?

Behold, the wages of the laborers who mowed your fields, which you have kept back by fraud, cry out, and the cries of those who reaped have entered into the ears of the Lord of hosts.

"If I have made gold my hope, and have said to the fine gold, 'You are my confidence;'

this also would be an iniquity to be punished by the judges; for I should have denied the God who is above.

"Behold, this is the man who did not make God his strength, but trusted in the abundance of his riches, and strengthened himself in his wickedness."

The rich man's wealth is his strong city, like an unscalable wall in his own imagination.

The disciples were amazed at his words. But Jesus answered again, "Children, how hard is it to enter into the Kingdom of God.

I will tell my soul, "Soul, you have many goods laid up for many years. Take your ease, eat, drink, be merry."'