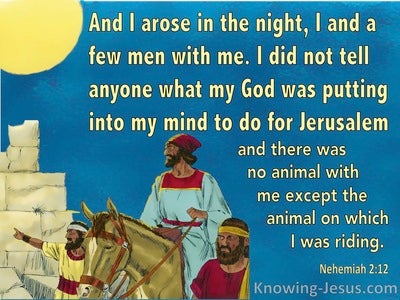 The cavalry attacks the flashing sword and the glittering spear! Many are the slain so many casualties! No end to bodies, and the soldiers trip over the corpses.

Their horses are swifter than leopards, and more cunning than wolves that attack at night. Their horsemen are galloping as they approach from far away. They swoop in like ravenous vultures.

I will overthrow royal thrones. I will annihilate the strength of national governments. I will overthrow chariots along with those who drive them. Both horses and their riders will fall, each one by means of his comrade's weapon.

"I stared into the night, and there was a man mounted on a red horse! The horse was standing among the myrtle trees in a ravine. Behind him there were red, brown, and white horses."

And it will come about that your choicest valleys will be filled with chariots, and horsemen will take their positions at the gates.

At the sound of the horseman and the archer the entire city flees. Its residents go into the thickets and climb among the rocks. Every city is abandoned, and no one lives in them.

""Come now, and make a deal with my master, the king of Assyria, and I'll give you 2,000 horses, if you can furnish them with riders.

Come now, all of you, make a bet with my master, the king of Assyria: I will give you two thousand horses, if you can furnish riders for them!

Harness the horses! Riders, mount up! Take your positions with your helmets! Polish lances, and put on armor!

Instead, you said, "No! We'll escape on horses!' Therefore, you'll flee away. And you said, "We'll ride off on swift steeds!' Therefore your pursuers will be swift.

Provide a mount for Paul to ride, and take him safely to Governor Felix."

Nehemiah 2:12
Verse Concepts
Those Who Did Not TellDuring One Night
Heart, And Holy Spirit

Then I got up at night, along with a few men with me. I had not confided to any person what my God had put in my heart to do for Jerusalem. Furthermore, there was no other animal with me except for the one I was riding.

He wrote in the name of King Ahasuerus and sealed it with the king's signet ring. He sent the letters by couriers on horseback, riding steeds especially bred for the king.

And I have observed servants riding on horses, while princes walk on the ground like servants.

At that time,' declares the LORD, "I will strike every horse with panic and every rider with insanity. I will keep my eyes on the house of Judah, but I will blind every horse of the invading armies.

At the sound of your battle cry, God of Jacob, both horse and chariot rider fell into deep sleep.

They will be like mighty soldiers who trample mud in the streets during battle. They will fight because the LORD is with them, and the opposing horsemen will be confused.

Then he summoned two centurions and ordered, "Get 200 soldiers ready to leave for Caesarea at nine o'clock tonight, along with 70 mounted soldiers and 200 soldiers with spears.

The next day, they let the horsemen ride with Paul while they returned to their barracks.