8 Bible Verses about Self Exultation 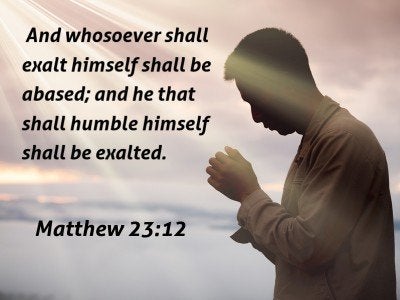 Who opposes and exalts himself above all that is called God, or that is worshiped; so that he as God sits in the temple of God, showing himself that he is God.

And upon a set day Herod, arrayed in royal apparel, sat upon his throne, and made an oration unto them. And the people gave a shout, saying, It is the voice of a god, and not of a man. And immediately the angel of the Lord smote him, because he gave not God the glory: and he was eaten of worms, and died.

And the king shall do according to his will; and he shall exalt himself, and magnify himself above every god, and shall speak astonishing things against the God of gods, and shall prosper till the wrath is accomplished: for what has been determined shall be done. Neither shall he regard the gods of his fathers, nor the desire of women, nor regard any god: for he shall magnify himself above all.

For you have said in your heart, I will ascend into heaven, I will exalt my throne above the stars of God: I will sit also upon the mount of the congregation, in the farthest sides of the north: I will ascend above the heights of the clouds; I will be like the most High.