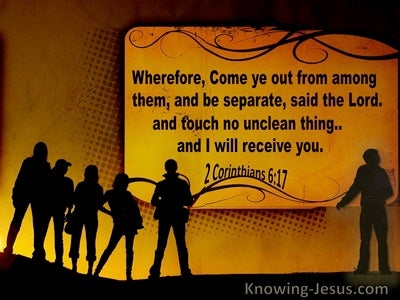 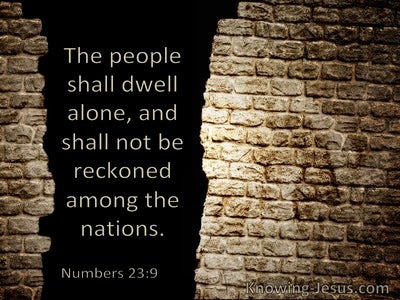 And the sons of Israel who had returned out of captivity and all those who had separated themselves unto them from the uncleanness of the Gentiles of the land, to seek the LORD God of Israel, ate

Now when these things were done, the princes came to me, saying, The people of Israel and the priests and the Levites, have not separated themselves from the peoples of the lands of the Canaanites, the Hittites, the Perizzites, the Jebusites, the Ammonites, the Moabites, the Egyptians, and the Amorites, doing according to their abominations, for they have taken of their daughters for themselves and for their sons, and the holy seed is mingled with the peoples of the lands; and the hand of the princes and of the governors has been foremost in this trespass.

Now, therefore, make confession unto the LORD God of your fathers and do his will; and separate yourselves from the peoples of the lands and from the strange women.

Now it came to pass, when they had heard the law, that they separated from Israel all the mixed multitude.

Therefore come out from among them, and be ye separate, saith the Lord, and do not touch the unclean thing; and I will receive you

And the seed of Israel had separated themselves from all strangers and stood and confessed their sins and the iniquities of their fathers.

But I have said unto you, Ye shall possess their land, and I will give it unto you in possession of inheritance, a land that flows with milk and honey. I AM your God, who have separated you from the other peoples.

Ye must, therefore, be holy unto me, for I the LORD am holy and have separated you from the other peoples, that ye should be mine.

For thou didst separate them from among all the peoples of the earth, to be thy inheritance, as thou didst speak by the hand of Moses, thy slave, when thou didst bring our fathers out of Egypt, O Lord GOD.

And I will put redemption between my people and thy people. Tomorrow shall this sign be.

For from the top of the rocks I have seen him, and from the hills I beheld him; behold, a people that shall dwell in confidence and shall not be counted among the Gentiles.

And the rest of the people, the priests, the Levites, the porters, the singers, the Nethinims, and all those that had separated themselves from the peoples of the lands unto the law of God, their wives, their sons, and their daughters, every one having knowledge and having understanding;

And thou shalt separate the Levites from among the sons of Israel; and the Levites shall be mine.

At that time the LORD separated the tribe of Levi to bear the ark of the covenant of the LORD, to stand before the LORD to minister unto him, and to bless in his name, unto this day.

Separate yourselves from among this congregation, and I will consume them in a moment.

Speak unto the congregation, saying, Separate yourselves now from the tent of Korah, Dathan, and Abiram.

And he spoke unto the congregation, saying, Depart from the tents of these wicked men and touch nothing of theirs lest peradventure ye be consumed in all their sins.

Depart from among this congregation, and I will consume them in a moment. And they fell upon their faces.