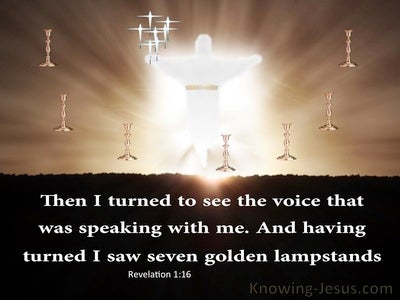 And you will make its seven lamps, and its lamps will be set up, and it will give light {in the space in front of it}.

And he made its seven lamps and its snuffers and its fire pans of pure gold.

"Speak to Aaron, and say to him: 'When you are setting up the lamps, the seven lamps will give light in front of the face of the lampstand.'"

Zechariah 4:2
Verse Concepts
FortiesThe Golden Lampstand
Visions And Dreams In ScriptureWhat Is This?

Revelation 1:12
Verse Concepts
Visions And Dreams In Scripture
Turning Round

And I turned to see the voice which was speaking with me, and [when I] turned, I saw seven gold lampstands,

"To the angel of the church in Ephesus write: "This is what the one who holds the seven stars in his right hand says, the one who walks in the midst of the seven gold lampstands:

And from the throne came out lightnings and sounds and thunders, and seven torches of fire [were] burning before the throne, which are the seven spirits of God.

and [he] had in his right hand seven stars, and a sharp double-edged sword coming out of his mouth, and his face [was] like the sun shining in its strength.

"And to the angel of the church in Sardis write: "This is what the one who has the seven spirits of God and the seven stars says: 'I know your works, that you have a name that you are alive, and you are dead.