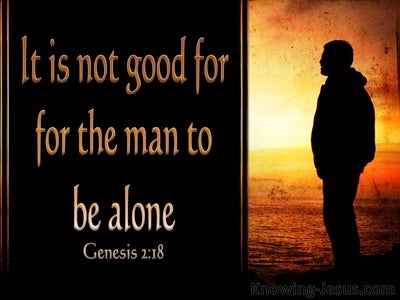 And God prepareth the man in His image; in the image of God He prepared him, a male and a female He prepared them.

And Jehovah God saith, 'Not good for the man to be alone, I do make to him an helper -- as his counterpart.' And Jehovah God formeth from the ground every beast of the field, and every fowl of the heavens, and bringeth in unto the man, to see what he doth call it; and whatever the man calleth a living creature, that is its name. And the man calleth names to all the cattle, and to fowl of the heavens, and to every beast of the field; and to man hath not been found an helper -- as his counterpart.read more.
And Jehovah God causeth a deep sleep to fall upon the man, and he sleepeth, and He taketh one of his ribs, and closeth up flesh in its stead. And Jehovah God buildeth up the rib which He hath taken out of the man into a woman, and bringeth her in unto the man;

Your women in the assemblies let them be silent, for it hath not been permitted to them to speak, but to be subject, as also the law saith; and if they wish to learn anything, at home their own husbands let them question, for it is a shame to women to speak in an assembly.

The wives! be subject to your own husbands, as is fit in the Lord; the husbands! love your wives, and be not bitter with them;

and a woman I do not suffer to teach, nor to rule a husband, but to be in quietness, for Adam was first formed, then Eve, and Adam was not deceived, but the woman, having been deceived, into transgression came,

In like manner, the wives, be ye subject to your own husbands, that even if certain are disobedient to the word, through the conversation of the wives, without the word, they may be won,

The habiliments of a man are not on a woman, nor doth a man put on the garment of a woman, for the abomination of Jehovah thy God is any one doing these.

And God blesseth them, and God saith to them, 'Be fruitful, and multiply, and fill the earth, and subdue it, and rule over fish of the sea, and over fowl of the heavens, and over every living thing that is creeping upon the earth.'

and the man saith, 'This is the proper step! bone of my bone, and flesh of my flesh!' for this it is called Woman, for from a man hath this been taken; therefore doth a man leave his father and his mother, and hath cleaved unto his wife, and they have become one flesh.

And he answering said to them, 'Did ye not read, that He who made them, from the beginning a male and a female made them, and said, For this cause shall a man leave father and mother, and cleave to his wife, and they shall be -- the two -- for one flesh? so that they are no more two, but one flesh; what therefore God did join together, let no man put asunder.'

but from the beginning of the creation, a male and a female God did make them; on this account shall a man leave his father and mother, and shall cleave unto his wife, and they shall be -- the two -- for one flesh; so that they are no more two, but one flesh;read more.
what therefore God did join together, let not man put asunder.'

for this cause shall a man leave his father and mother, and shall be joined to his wife, and they shall be -- the two -- for one flesh;' this secret is great, and I speak in regard to Christ and to the assembly; but ye also, every one in particular -- let each his own wife so love as himself, and the wife -- that she may reverence the husband.

Unto the woman He said, 'Multiplying I multiply thy sorrow and thy conception, in sorrow dost thou bear children, and toward thy husband is thy desire, and he doth rule over thee.'

who, having ceased to feel, themselves did give up to the lasciviousness, for the working of all uncleanness in greediness;

and whoredom, and all uncleanness, or covetousness, let it not even be named among you, as becometh saints;

for sufficient to us is the past time of life the will of the nations to have wrought, having walked in lasciviousnesses, desires, excesses of wines, revellings, drinking-bouts, and unlawful idolatries,

'When a man taketh a wife, and hath gone in unto her, and hated her, and laid against her actions of words, and brought out against her an evil name, and said, This woman I have taken, and I draw near unto her, and I have not found in her tokens of virginity: Then hath the father of the damsel -- and her mother -- taken and brought out the tokens of virginity of the damsel unto the elders of the city in the gate,read more.
and the father of the damsel hath said unto the elders, My daughter I have given to this man for a wife, and he doth hate her; and lo, he hath laid actions of words, saying, I have not found to thy daughter tokens of virginity -- and these are the tokens of the virginity of my daughter! and they have spread out the garment before the elders of the city. 'And the elders of that city have taken the man, and chastise him, and fined him a hundred silverlings, and given to the father of the damsel, because he hath brought out an evil name on a virgin of Israel, and she is to him for a wife, he is not able to send her away all his days. And if this thing hath been truth -- tokens of virginity have not been found for the damsel -- then they have brought out the damsel unto the opening of her father's house, and stoned her have the men of her city with stones, and she hath died, for she hath done folly in Israel, to go a-whoring in her father's house; and thou hast put away the evil thing out of thy midst.

Wherefore also God did give them up, in the desires of their hearts, to uncleanness, to dishonour their bodies among themselves;

'Thou dost not pollute thy daughter to cause her to go a-whoring, that the land go not a-whoring, and the land hath been full of wickedness.

Before they lie down, the men of the city -- men of Sodom -- have come round about against the house, from young even unto aged, all the people from the extremity; and they call unto Lot and say to him, 'Where are the men who have come in unto thee to-night? bring them out unto us, and we know them.' And Lot goeth out unto them, to the opening, and the door hath shut behind him,read more.
and saith, 'Do not, I pray you, my brethren, do evil;

'Whoever lieth with a beast is certainly put to death.

'And unto a woman in the separation of her uncleanness thou dost not draw near to uncover her nakedness.