15 Bible Verses about Shortage Other Than Food 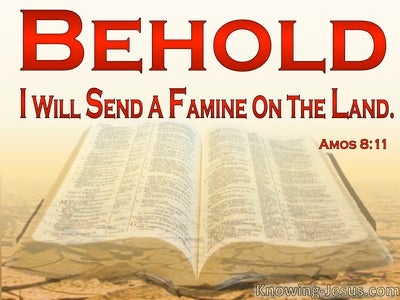 what if there are five less than the fifty godly people? Will you destroy the whole city because five are lacking?" He replied, "I will not destroy it if I find forty-five there."

The Benjaminites returned at that time, and the Israelites gave to them the women they had spared from Jabesh Gilead. But there were not enough to go around.

When the water in the skin was gone, she shoved the child under one of the shrubs.

When the money from the lands of Egypt and Canaan was used up, all the Egyptians came to Joseph and said, "Give us food! Why should we die before your very eyes because our money has run out?"

When that year was over, they came to him the next year and said to him, "We cannot hide from our lord that the money is used up and the livestock and the animals belong to our lord. Nothing remains before our lord except our bodies and our land.

The descendants of Joseph said to Joshua, "Why have you assigned us only one tribal allotment? After all, we have many people, for until now the Lord has enabled us to increase in number."

The descendants of Joseph said, "The whole hill country is inadequate for us, and the Canaanites living down in the valley in Beth Shean and its surrounding towns and in the Valley of Jezreel have chariots with iron-rimmed wheels."

Ben Hadad sent another message to him, "May the gods judge me severely if there is enough dirt left in Samaria for my soldiers to scoop up in their hands."

No,' they replied. 'There won't be enough for you and for us. Go instead to those who sell oil and buy some for yourselves.'

Not even Lebanon could supply enough firewood for a sacrifice; its wild animals would not provide enough burnt offerings.

But when the king came in to see the wedding guests, he saw a man there who was not wearing wedding clothes.

Be certain of this, the time is coming," says the sovereign Lord, "when I will send a famine through the land -- not a shortage of food or water but an end to divine revelation!