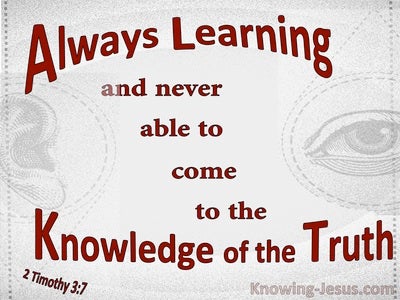 Who delight in doing evil
And rejoice in the perversity of evil;

“Though evil is sweet in his mouth
And he hides it under his tongue,

always learning and never able to come to the knowledge of the truth.

This is the judgment, that the Light has come into the world, and men loved the darkness rather than the Light, for their deeds were evil.

Jesus answered them, “Truly, truly, I say to you, everyone who commits sin is the slave of sin.

Professing to be wise, they became fools, and exchanged the glory of the incorruptible God for an image in the form of corruptible man and of birds and four-footed animals and crawling creatures. Therefore God gave them over in the lusts of their hearts to impurity, so that their bodies would be dishonored among them.read more.
For they exchanged the truth of God for a lie, and worshiped and served the creature rather than the Creator, who is blessed forever. Amen.

For this reason God gave them over to degrading passions; for their women exchanged the natural function for that which is unnatural, and in the same way also the men abandoned the natural function of the woman and burned in their desire toward one another, men with men committing indecent acts and receiving in their own persons the due penalty of their error. And just as they did not see fit to acknowledge God any longer, God gave them over to a depraved mind, to do those things which are not proper,read more.
being filled with all unrighteousness, wickedness, greed, evil; full of envy, murder, strife, deceit, malice; they are gossips, slanderers, haters of God, insolent, arrogant, boastful, inventors of evil, disobedient to parents, without understanding, untrustworthy, unloving, unmerciful; and although they know the ordinance of God, that those who practice such things are worthy of death, they not only do the same, but also give hearty approval to those who practice them.

in order that they all may be judged who did not believe the truth, but took pleasure in wickedness.

But realize this, that in the last days difficult times will come. For men will be lovers of self, lovers of money, boastful, arrogant, revilers, disobedient to parents, ungrateful, unholy,