15 Bible Verses about Survivors Of The Nations 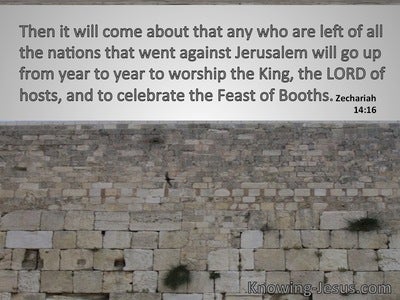 And every one that is left of all the nations which came against Jerusalem shall even go up from year to year to worship the King, the LORD of the hosts, and to celebrate the feast of the tabernacles.

Assemble yourselves and come; draw near together, all ye that are escaped of the Gentiles. They have no knowledge that set up the wood of their graven image and pray unto the god that does not save.

And I will set a sign among them, and I will send those that escape of them unto the Gentiles, to Tarshish, Pul, and Lud, that draw the bow, to Tubal, and Javan, to the isles afar off, that have never heard my name, nor seen my glory; and they shall declare my glory among the Gentiles.

Because if ye do in any wise go back and cleave unto the remnant of these Gentiles that remain among you and shall make marriages with them and go in unto them and they to you,

And death shall be chosen rather than life by all the residue of those that remain of this evil generation, in all the places where I have driven those that remain, said the LORD of the hosts.

Genesis 14:10
Verse Concepts
Peoples Who FledBitumen and tarMinerals
Escaping To MountainsPeople Falling From A Height

And the vale of Siddim was full of slimepits, and the kings of Sodom and Gomorrah fled and fell there; and those that remained fled to the mountain.

And after all that is come upon us for our evil deeds and for our great guiltiness, seeing that thou our God hast intervened that we no longer be oppressed because of our iniquities and hast given us such an escape as this,

O LORD God of Israel, thou art righteous; for we have an escape, as it is this day, behold us here, before thee in our guiltiness; for we cannot stand before thee because of this.

There were none of the Anakims left in the land of the sons of Israel; only in Gaza, in Gath, and in Ashdod, there remained.

And it came to pass when Joshua and the sons of Israel had finished slaying them with a very great slaughter until they were consumed, that those who remained of them entered into strong cities.

Judges 2:23
Verse Concepts
Not Driving Them Out

Therefore, the LORD left those Gentiles, without driving them out hastily; neither did he deliver them into the hand of Joshua.

Now these are the Gentiles which the LORD left, to prove Israel with them, even as many of Israel as had not known all the wars of Canaan;

Now Zebah and Zalmunna were in Karkor and their hosts with them, about fifteen thousand men, all that were left of all the hosts of the sons of the east, for one hundred and twenty thousand men that drew sword had been slain.