19 Bible Verses about Taking By The Hand 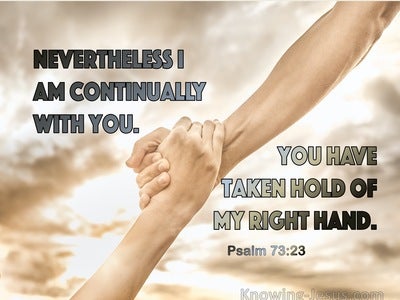 But Lot kept lingering in the city, so the men grabbed his hand and the hands of his wife and two daughters (because of the LORD's compassion for him!), brought them out of the city, and left them outside.

Get up! Pick up the youth and grab his hand, because I will make a great nation of his descendants."

Then Samson told the young man who had been leading him around by the hand, "Let me touch and feel the pillars on which this building rests, and I'll support myself against them."

Then Elisha told Israel's king, "Draw the bow!" As he did so, Elisha laid his hands on top of the king's hands

After he left there, he encountered Rechab's son Jehonadab. After he greeted him, Jehu asked him, "Is your heart right, as my heart is with yours?" "It is," Jehonadab answered.

He touched her hand, and the fever left her. Then she got up and began serving him.

He went up to her, took her by the hand, and helped her up. The fever left her, and she began serving them.

When the crowd had been driven outside, he went in, took her by the hand, and the young lady got up.

He took her by the hand and told her, "Talitha koum," which means, "Young lady, I tell you, get up!"

But he took her hand and called out, "Young lady, get up!"

But they kept silent. So he took hold of the man, healed him, and sent him away.

But Jesus took his hand and helped him up, and he stood up.

At once Jesus reached out his hand, caught him, and asked him, "You who have so little faith, why did you doubt?"

Later, the angel of the LORD came a second time, grabbed him, and said "Get up! Eat! The journey ahead is too difficult for you!"

"I've called you in righteousness. I'll take hold of your hand. I'll preserve you and appoint you as a covenant to the people, as a light for the nations,

Then Peter took hold of his right hand and began to help him up. Immediately his feet and ankles became strong,

He extended his hand and helped her get up. Then he called the saints, including the widows, and gave her back to them alive.

The tribune took him by the hand, stepped aside to be alone with him, and asked, "What have you got to tell me?"

Psalm 73:23
Verse Concepts
Blessings For The Right Handguidance
Right Hand Of GodGod Always With You

But now I am always with you, for you keep holding my right hand.