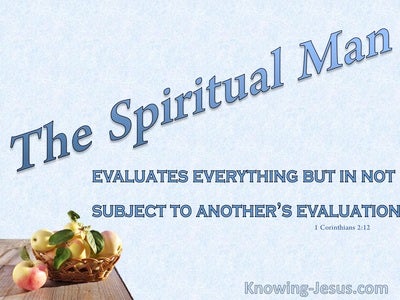 And Elihu, the son of Barachel, the Buzite, answered and said, I am younger, and ye are older; therefore, I was afraid, and I feared to declare unto you my opinion. I said, Days shall speak, and the multitude of years shall declare wisdom. Certainly there is a spirit in man, and the inspiration of the Almighty gives them understanding.read more.
Great men are not always wise; neither do the aged understand judgment.

Then there arose certain of the synagogue, which is called the synagogue of the Libertines, and Cyrenians and Alexandrians and of those of Cilicia and of Asia, disputing with Stephen. And they were not able to resist the wisdom and the Spirit by which he spoke.

Now we have not received the spirit of the world, but the Spirit which is of God, that we might know the things that God has given us. Which things also we speak, not in the words which man's wisdom teaches, but with doctrine of the Holy Spirit, jointly fitting spiritual things by spiritual means. But the natural man does not perceive the things of the Spirit of God, for they are foolishness unto him; neither can he understand them because they are spiritually discerned.

And when they came there to the hill, behold, the company of prophets met him, and the Spirit of God prospered him, and he prophesied among them.

And thy slave is in the midst of thy people whom thou hast chosen, a great people, that cannot be numbered nor counted for multitude. Give, therefore, thy slave a hearing heart to judge thy people that I may discern between good and evil, for who is able to govern this thy so great a people?

And God gave Solomon exceedingly great wisdom and intelligence and magnanimity of heart, even as the sand that is on the sea shore. And Solomon's wisdom excelled the wisdom of all the sons of the east and all the wisdom of the Egyptians. For he was wiser than all men, than Ethan, the Ezrahite, and Heman and Chalcol and Darda, the sons of Mahol; and he was named in all nations round about.read more.
And he spoke three thousand proverbs: and his songs were a thousand and five. And he spoke of trees, from the cedar tree that is in Lebanon even unto the hyssop that springs out of the wall. He also spoke of animals and of fowl and of serpents and of fishes. And they came from all peoples to hear the wisdom of Solomon, from all kings of the earth, who had heard of his wisdom.

And when the queen of Sheba heard of the fame of Solomon concerning the name of the LORD, she came to prove him with enigmas. And she came to Jerusalem with a very great train, with camels that bore spices and very much gold and precious stones; and when she was come to Solomon, she communed with him of all that was in her heart. And Solomon told her all her questions; there was not any thing hid from the king, which he did not tell her.read more.
And when the queen of Sheba had seen all Solomon's wisdom and the house that he had built, likewise the food of his table and the sitting of his slaves and the attendance of his ministers and their apparel, and his butlers and his burnt offering which he sacrificed in the house of the LORD, there was no more spirit in her. And she said to the king, It was a true report that I heard in my own land of thy words and of thy wisdom. But I did not believe it until I came, and my eyes have seen that not even the half was told me. Thy wisdom and good exceeds the fame which I heard. Blessed are thy men, blessed are these thy slaves, who stand continually before thee and that hear thy wisdom. Blessed be the LORD thy God, who delighted in thee, to set thee on the throne of Israel; because the LORD has always loved Israel, therefore he made thee king, to do justice and righteousness. And she gave the king one hundred and twenty talents of gold and a very great store of spices and precious stones; never again did there come such abundance of spices as these which the queen of Sheba gave to King Solomon. And the navy of Hiram, that had brought the gold from Ophir, also brought in from Ophir a great plenty of brazil wood and precious stones. And the king made of the brazil wood banisters for the house of the LORD and for the king's houses, harps also and psalteries for the singers; there never had been such brazil wood, nor was it seen again unto this day. And King Solomon gave unto the queen of Sheba all her desire, whatever she asked, beside that which Solomon gave her of his royal bounty. So she turned and went to her own country, she and her slaves. Now the weight of gold that came to Solomon in one year was six hundred and sixty-six talents of gold, besides what he had from the merchantmen and from the trade of the spice merchants and from all the kings of Arabia and from the princes of the land. And King Solomon made two hundred shields of beaten gold; six hundred shekels of gold went into each shield. Likewise he made three hundred shields of beaten gold; three pounds of gold went into each shield; and the king put them in the house of the forest of Lebanon. The king also made a great throne of ivory and overlaid it with the purest gold. The throne had six steps, and the top of the throne was round behind, and there were stays on either side on the place of the seat, and two lions stood beside the stays. And twelve lions stood there on the one side and on the other upon the six steps; there was not the like made in any other kingdom. And all King Solomon's drinking vessels were of gold, and likewise all the vessels of the house of the forest of Lebanon were of pure gold; there was no silver, for in the days of Solomon it was not esteemed. For the king had at sea a navy of Tarshish with the navy of Hiram; once every three years the navy of Tarshish came, bringing gold, silver, ivory, and apes, and peacocks. So King Solomon exceeded all the kings of the earth for riches and for wisdom.

Now the queen, by reason of the words of the king and of his princes, came into the banquet room. The queen spoke and said, O king, live for ever: let not thy thoughts trouble thee, nor let thy countenance be pale. There is a man in thy kingdom, in whom lives the spirit of the holy God; and in the days of thy father light and intelligence and wisdom, like the knowledge of God, was found in him; whom the king Nebuchadnezzar, thy father, made prince over all the magicians, astrologers, Chaldeans, and fortune-tellers; thus did thy father, the king, because Daniel, whom the king named Belteshazzar, was found to have a more excellent spirit and greater knowledge and understanding interpreting dreams, unraveling questions, and dissolving doubts. Now let Daniel be called, and he will show thee the interpretation.read more.
Then Daniel was brought in before the king. And the king spoke and said unto Daniel, Art thou that Daniel, who art of the sons of the captivity of Judah, whom my father brought out of Judea? I have heard of thee, that the spirit of the holy God is in thee and that light and understanding and greater wisdom was found in thee. And now the wise men, the astrologers, have been brought in before me that they should read this writing and make known unto me its interpretation, but they could not show the interpretation of the thing: And I have heard of thee, that thou canst declare that which is in doubt and unravel difficulties: now if thou canst read this writing and show me its interpretation, thou shalt be clothed with purple and have a chain of gold about thy neck and shalt be the third ruler in the kingdom.

therefore, brethren, seek out among you seven men of whom you bear witness, full of the Holy Spirit and wisdom, whom we may appoint over this business.

Acts 15:28
Verse Concepts
Good ActivityLed By The SpiritMind, Of ChristGod Is Immanent
Guidance Of The Holy SpiritCompromise, As A SolutionThe Holy Spirit In The ChurchExamples Of Life In The Spirit

For it seemed good to the Holy Spirit and to us to lay upon you no greater burden than these necessary things:

For who among men knows the things of man, except the spirit of man which is in him? Even so no one has known the things of God, but the Spirit of God.

For to one is given by the Spirit a word of wisdom; to another, a word of knowledge according to the same Spirit;

For this cause we also, since the day we heard it, do not cease to pray for you, asking that ye might be filled with the knowledge of his will in all wisdom and spiritual understanding,