22 Bible Verses about Trumpets For Battle 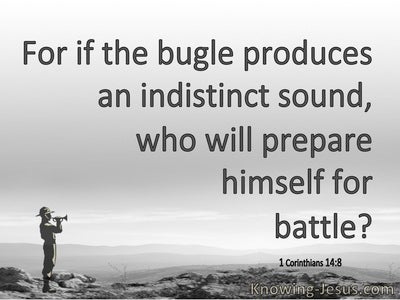 For if the trumpet gives an uncertain sound, who shall prepare himself to the battle?

And when ye go to war in your land against the enemy that oppresses you, then ye shall blow an alarm with the trumpets; and ye shall be remembered before the LORD your God, and ye shall be saved from your enemies.

Set ye up a banner in the land, blow the shofar among the Gentiles, prepare the nations against her, call together against her the kingdoms of Ararat, Minni, and Ashchenaz; appoint a captain against her; cause the horses to come up as raised up locusts.

Therefore, behold, the days come, said the LORD, that I will cause an alarm of war to be heard in Rabbah of the Ammonites; and it shall be made a desolate heap, and her cities shall be burned with fire; then shall Israel be heir unto those that were his heirs, said the LORD.

A day of the shofar and alarm upon the strong cities, and upon the high towers.

My bowels, my bowels! I am pained at my very heart; my heart makes a noise in me; I cannot hold my peace because thou hast heard, O my soul, the sound of the shofar, the alarm of war.

O ye sons of Benjamin, gather yourselves to flee out of the midst of Jerusalem and blow the shofar in Tekoa and set up as a sign smoke in Bethhaccerem; for evil appears out of the north wind and great destruction.

How long shall I see the banner and hear the voice of the shofar?

They shall blow the trumpet and make everything ready, but there shall be no one to go forth to the battle, for my wrath is upon all the multitude thereof.

saying, No, but we will go into the land of Egypt, where we shall see no war, nor hear the sound of the shofar, nor have hunger of bread; and there we will dwell:

but I will send fire in Moab, and it shall devour the palaces of Kerioth; and Moab shall die in tumult, with shouting and with the sound of the shofar:

And seven priests shall bear before the ark seven shofarot of jubilee; and the seventh day ye shall go around the city seven times, and the priests shall blow with the shofarot.

And when the priests had blown the shofarot the seventh time, Joshua said unto the people, Shout, for the LORD has given you the city.

So Gideon and the hundred men that were with him came unto the outside of the camp in the beginning of the middle watch when only the guards were awake, and they blew the shofarot and broke the pitchers that were in their hands. And the three companies blew the shofarot; and breaking the pitchers, they held the torches in their left hands and the shofarot in their right hands to blow with; and they cried, The sword of I AM The Hewer!

Judges 7:22
Verse Concepts
Killing One AnotherChaos
Three To Four HundredThree Hundred And Above

But the three hundred blew the shofarot, and the LORD set each man's sword against his fellow, even throughout all the camp; and the host fled to Bethshittah in Zererath and to the border of Abelmeholah unto Tabbath.

And having taken provision for the people in his hands with their shofarot; he sent all the other Israelites each one to his tent and retained those three hundred men, and the camp of Midian was beneath him in the valley.

And dividing the three hundred men into three companies, he put a shofar in each man's hand with empty pitchers and torches burning within the pitchers.