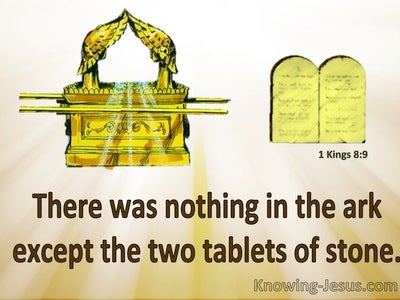 When he finished speaking with Moses on Mount Sinai, he gave him the two Tablets of the Testimony, tablets of stone written by the finger of God.

Then Moses turned and went down the mountain with the two Tablets of the Testimony in his hand, tablets which were written on both sides. They were written on one side and the other.

He declared to you his covenant, which he commanded you to observe the Ten Commandments that he wrote on two stone tablets.

"The LORD declared these commands in a loud voice to your entire assembly on the mountain from out of the fire and dark clouds, and nothing more was added. He inscribed them on two tablets of stone and gave them to me.

So I grabbed the two tablets and then threw them out of my hands, breaking them before your eyes.

There was nothing in the ark except for the two tablets that Moses had placed there while Israel was encamped at Horeb, where the LORD made a covenant with the Israelis after he had brought them out of the land of Egypt.

Then the LORD gave me the two stone tablets on which God inscribed with his own finger all the words that the LORD spoke to you on the mountain from the middle of the fire that day when you were all assembled together.

Deuteronomy 9:11
Verse Concepts
Terms Of The Covenant At Sinai
More Than One Month

At the end of 40 days and nights, the LORD gave to me the two stone Tablets of the Covenant.

The ark was empty except for the two stone tablets that Moses had placed there at Horeb when the LORD had made a covenant with the Israelis after they had come out of the land of Egypt.

"So I turned and went down from the mountain while the mountain was on fire. The two Tablets of the Covenant were in both of my hands.

The LORD told Moses, "Cut out for yourself two stone tablets like the first ones, and I'll write on the tablets the words which were on the first tablets that you broke.

When Moses came down from Mount Sinai, he had the two tablets in his hand, and he did not know that the skin of his face was ablaze with light because he had been speaking with God.

"At that time, the LORD told me, "Chisel two tablets of stone for yourself just like the first ones, and then come up to me on the mountain. Also make for yourself a wooden chest.

So I made a chest out of acacia wood and chiseled two tablets of stones just like the first ones. Then I went up the mountain with the two tablets in my hands.