26 Bible Verses about While Still Speaking 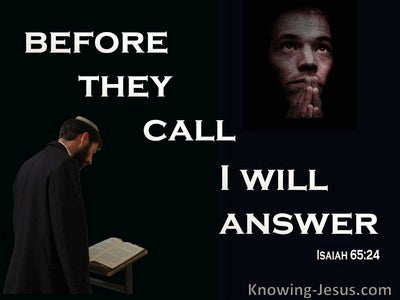 And it hath come to pass, They do not yet call, and I answer, They are yet speaking, and I hear.

While Peter is yet speaking these sayings, the Holy spirit fell upon all those hearing the word,

While he is yet speaking, lo, a bright cloud overshadowed them, and lo, a voice out of the cloud, saying, 'This is My Son, -- the Beloved, in whom I did delight; hear him.'

Lo, thou are yet speaking there with the king, and I come in after thee, and have completed thy words.'

And lo, she is yet speaking with the king, and Nathan the prophet hath come in;

He is yet speaking with them, and lo, the messenger is coming down unto him, and he saith, 'Lo, this is the evil from Jehovah: what -- do I wait for Jehovah any more?'

While this one is speaking another also hath come and saith, 'Fire of God hath fallen from the heavens, and burneth among the flock, and among the young men, and consumeth them, and I am escaped -- only I alone -- to declare it to thee.'

While this one is speaking another also hath come and saith, 'Chaldeans made three heads, and rush on the camels, and take them, and the young men they have smitten by the mouth of the sword, and I am escaped -- only I alone -- to declare it to thee.'

While this one is speaking another also hath come and saith, 'Thy sons and thy daughters are eating, and drinking wine, in the house of their brother, the first-born.

And it cometh to pass, before he hath finished speaking, that lo, Rebekah (who was born to Bethuel, son of Milcah, wife of Nahor, brother of Abraham) is coming out, and her pitcher on her shoulder,

'Before I finish speaking unto my heart, then lo, Rebekah is coming out, and her pitcher on her shoulder, and she goeth down to the fountain, and draweth; and I say unto her, Let me drink, I pray thee,

He is yet speaking with them, and Rachel hath come with the flock which her father hath, for she is shepherdess;

While the word is in the king's mouth a voice from the heavens hath fallen: To thee they are saying: O Nebuchadnezzar the king, the kingdom hath passed from thee,

While he is speaking these things to them, lo, a ruler having come, was bowing to him, saying that 'My daughter just now died, but, having come, lay thy hand upon her, and she shall live.'

And while he was yet speaking to the multitudes, lo, his mother and brethren had stood without, seeking to speak to him,

And while he is yet speaking, lo, Judas, one of the twelve did come, and with him a great multitude, with swords and sticks, from the chief priests and elders of the people.

And immediately -- while he is yet speaking -- cometh near Judas, one of the twelve, and with him a great multitude, with swords and sticks, from the chief priests, and the scribes, and the elders;

As he is yet speaking, there come from the chief of the synagogue's house, certain, saying -- 'Thy daughter did die, why still dost thou harass the Teacher?'

While he is yet speaking, there doth come a certain one from the chief of the synagogue's house, saying to him -- 'Thy daughter hath died, harass not the Teacher;'

And in his speaking, a certain Pharisee was asking him that he might dine with him, and having gone in, he reclined (at meat),

And while he is speaking, lo, a multitude, and he who is called Judas, one of the twelve, was coming before them, and he came nigh to Jesus to kiss him,

and Peter said, 'Man, I have not known what thou sayest;' and presently, while he is speaking, a cock crew.

And as they are speaking unto the people, there came to them the priests, and the magistrate of the temple, and the Sadducees --

and talking with him he went in, and doth find many having come together.

'And in my beginning to speak, the Holy Spirit did fall upon them, even as also upon us in the beginning,

'And whenever they may deliver you up, be not anxious how or what ye may speak, for it shall be given you in that hour what ye shall speak;