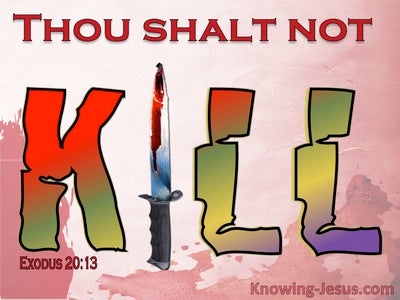 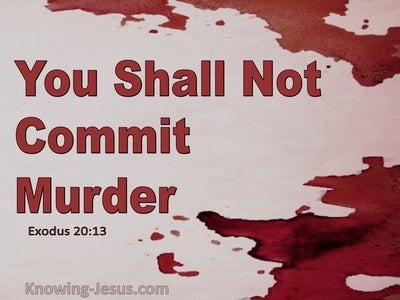 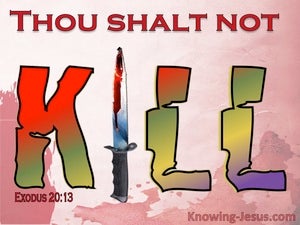 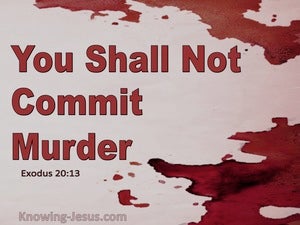 12 Honor your father and your mother: that your days may be long upon the land which the LORD your God gives you. 13  You shall not kill. 14 You shall not commit adultery.

And if a man strikes his servant, or his maid, with a rod, and he dies under his hand; he shall be surely punished.

For, behold, the LORD comes out of his place to punish the inhabitants of the earth for their iniquity: the earth also shall disclose her bloodshed, and shall no more cover her slain.

You have heard that it was said by them of old time, You shall not kill; and whosoever shall kill shall be in danger of the judgment:

For he that said, Do not commit adultery, said also, Do not kill. Now if you commit no adultery, yet you kill, you are become a transgressor of the law.

But if a man comes presumptuously upon his neighbor, to slay him with guile; you shall take him from my altar, that he may die.

But if the ox were accustomed to gore with its horn in time past, and it has been testified to its owner, and he has not kept it in, but that it has killed a man or a woman; the ox shall be stoned, and its owner also shall be put to death.

But if he strikes him with an instrument of iron, so that he dies, he is a murderer: the murderer shall surely be put to death.

But if any man hate his neighbor, and lie in wait for him, and rise up against him, and wounds him mortally that he dies, and flees into one of these cities:

Why have you despised the commandment of the LORD, to do evil in his sight? you have killed Uriah the Hittite with the sword, and have taken his wife to be your wife, and have slain him with the sword of the children of Ammon.

Moreover Manasseh shed innocent blood very much, till he had filled Jerusalem from one end to another; besides his sin with which he made Judah to sin, in doing that which was evil in the sight of the LORD.

Thus Joash the king remembered not the kindness which Jehoiada his father had done to him, but slew his son. And when he died, he said, The LORD look upon it, and repay it.

He sits in the lurking places of the villages: in the secret places does he murder the innocent: his eyes are secretly set against the poor.

If they say, Come with us, let us lie in wait for blood, let us lurk secretly for the innocent without cause:

But know you for certain, that if you put me to death, you shall surely bring innocent blood upon yourselves, and upon this city, and upon its inhabitants: for of a truth the LORD has sent me unto you to speak all these words in your ears.

And when the natives saw the creature hang on his hand, they said among themselves, No doubt this man is a murderer, whom, though he has escaped the sea, yet justice allows not to live.

Envyings, murders, drunkenness, revelings, and such like: of which I tell you beforehand, as I have also told you in time past, that they who do such things shall not inherit the kingdom of God.

Knowing this, that the law is not made for a righteous man, but for the lawless and disobedient, for the ungodly and for sinners, for unholy and profane, for murderers of fathers and murderers of mothers, for manslayers,

For he shall have judgment without mercy, that has showed no mercy; and mercy triumphs over judgment.

Not as Cain, who was of that wicked one, and slew his brother. And why slew he him? Because his own works were evil, and his brother's righteous.