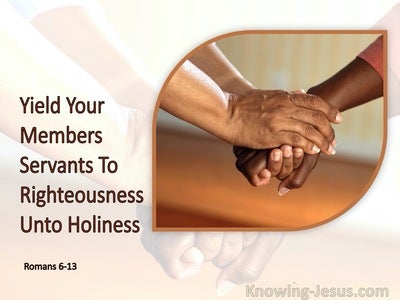 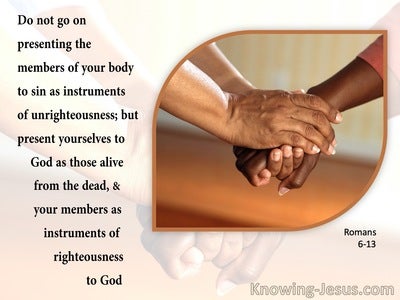 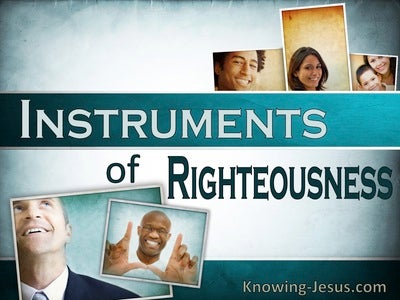 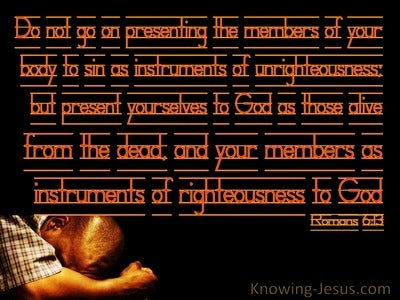 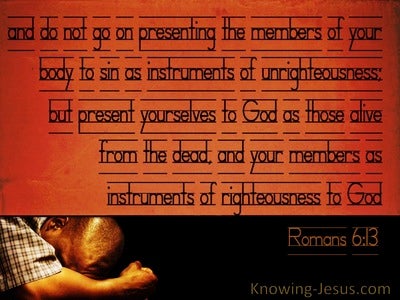 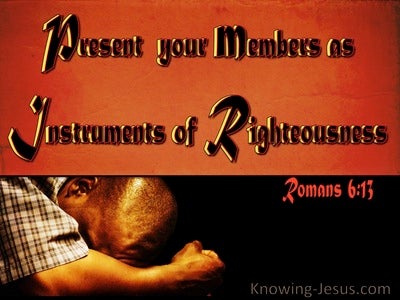 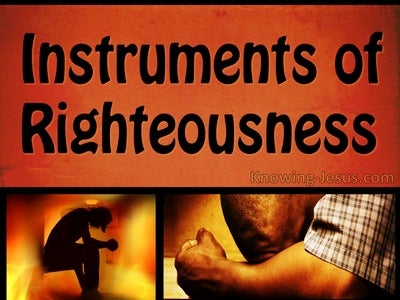 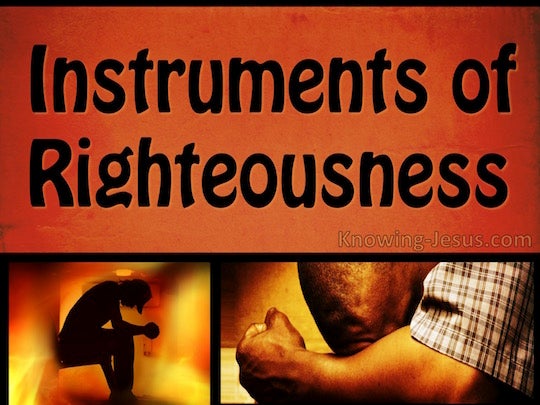 And do not offer any parts

Do not go on offering members of your body to sin as instruments of wickedness. But offer yourselves to God [in a decisive act] as those alive [raised] from the dead [to a new life], and your members [all of your abilities—sanctified, set apart] as instruments of righteousness [yielded] to God.

And do not offer the parts of your bodies [i.e., hands, eyes, etc. See Matt. 5:29-30] as tools for [accomplishing] evil purposes; but [instead] offer yourselves to God, as [people who are] alive from the dead [i.e., no longer under the power of sin] and the parts of your bodies as tools for [accomplishing] righteous purposes for God.

and no longer lend your faculties as unrighteous weapons for Sin to use. On the contrary surrender your very selves to God as living men who have risen from the dead, and surrender your several faculties to God, to be used as weapons to maintain the right.

Being Devoted to God » Should be » With our members

Grace » The reward for being under grace

Holiness » Saints » Should yield their members as instruments of

Resist temptation » The duty of resisting

Righteousness » Saints » Should yield their members as instruments of

Sin » Why sin does not have dominion over you

Submission » To the divine will

Temptation » The duty of resisting

Holiness Of The Saints

Taking Care Of Your Body

English(KJV)
Strong's
Root Form
Definition
Usage
Neither
G3366
μηδέ
mede
neither, nor, not, nor yet, not once, no not, not so much as
Usage: 31

and, also, even, both, then, so, likewise, not tr., , vr and
Usage: 0
of righteousness
G1343
δικαιοσύνη
Dikaiosune
righteousness
Usage: 83

James, The General Epistle of

Word Count of 37 Translations in Romans 6:13 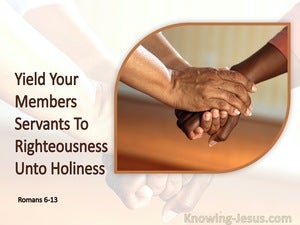 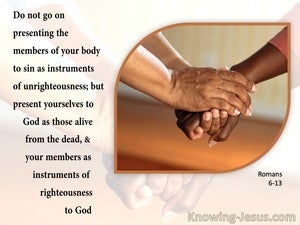 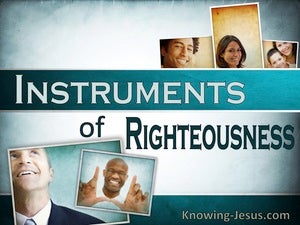 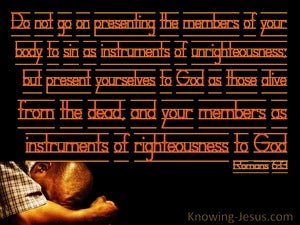 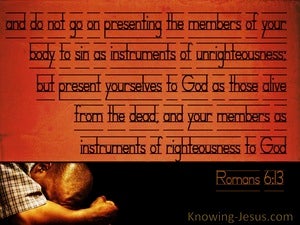 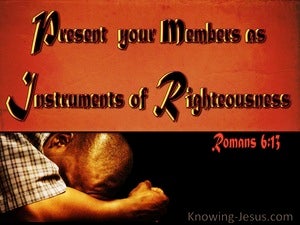 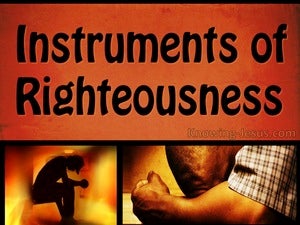 12 Let not sin therefore reign in your mortal body, that you should obey it in its lusts. 13 Neither yield your members as instruments of unrighteousness unto sin: but yield yourselves unto God, as those that are alive from the dead, and your members as instruments of righteousness unto God. 14 For sin shall not have dominion over you: for you are not under the law, but under grace.

Raised from the Dead

For The Glory Of God

Risen From The Dead

For when we were in the flesh, the passions of sins, which were by the law, did work in our members to bring forth fruit unto death.

I beseech you therefore, brethren, by the mercies of God, that you present your bodies a living sacrifice, holy, acceptable unto God, which is your reasonable service.

Mortify therefore your members which are upon the earth; fornication, uncleanness, inordinate affection, evil desire, and covetousness, which is idolatry:

Who his own self bore our sins in his own body on the tree, that we, being dead to sins, should live unto righteousness: by whose stripes you were healed.

Know you not, that to whom you yield yourselves servants to obey, his servants you are to whom you obey; whether of sin unto death, or of obedience unto righteousness?

Even so the tongue is a little member, and boasts great things. Behold, how great a forest a little fire kindles!

Likewise reckon you also yourselves to be dead indeed unto sin, but alive unto God through Jesus Christ our Lord.

That he no longer should live the rest of his time in the flesh to the lusts of men, but to the will of God.

For all that do such things, and all that do unrighteously, are an abomination unto the LORD your God.

Now be you not stiff-necked, as your fathers were, but yield yourselves unto the LORD, and enter into his sanctuary, which he has sanctified forever: and serve the LORD your God, that the fierceness of his wrath may turn away from you.

The mouth of the righteous speaks wisdom, and his tongue talks of justice.

There is one that speaks like the piercings of a sword: but the tongue of the wise brings health.

Say you to the righteous, that it shall be well with him: for they shall eat the fruit of their deeds.

Let the wicked forsake his way, and the unrighteous man his thoughts: and let him return unto the LORD, and he will have mercy upon him; and to our God, for he will abundantly pardon.

Then Nebuchadnezzar spoke, and said, Blessed be the God of Shadrach, Meshach, and Abednego, who has sent his angel, and delivered his servants that trusted in him, and have changed the king's word, and yielded their bodies, that they might not serve nor worship any god, except their own God.

For this my son was dead, and is alive again; he was lost, and is found. And they began to be merry.

It was right that we should make merry, and be glad: for this your brother was dead, and is alive again; and was lost, and is found.

Verily, verily, I say unto you, He that hears my word, and believes on him that sent me, has everlasting life, and shall not come into condemnation; but is passed from death unto life.

But unto them that are contentious, and do not obey the truth, but obey unrighteousness, indignation and wrath,

Know you not that the unrighteous shall not inherit the kingdom of God? Be not deceived: neither fornicators, nor idolaters, nor adulterers, nor effeminate, nor abusers of themselves with mankind,

For you are bought with a price: therefore glorify God in your body, and in your spirit, which are God's.

And that he died for all, that they who live should no longer live unto themselves, but unto him who died for them, and rose again.

And this they did, not as we expected, but first gave their own selves to the Lord, and unto us by the will of God.

(For the weapons of our warfare are not carnal, but mighty through God to the pulling down of strongholds;)

Even when we were dead in sins, has made us alive together with Christ, (by grace you are saved;)

Therefore he says, Awake you that sleep, and arise from the dead, and Christ shall give you light.

According to my earnest expectation and my hope, that in nothing I shall be ashamed, but that with all boldness, as always, so now also Christ shall be magnified in my body, whether it be by life, or by death.

And you, being dead in your sins and the uncircumcision of your flesh, has he made alive together with him, having forgiven you all trespasses;

That they all might be condemned who believed not the truth, but had pleasure in unrighteousness.

From where come wars and fightings among you? come they not from here, even of your lusts that war in your members?

And shall receive the reward of unrighteousness, as they that count it pleasure to revel in the daytime. Spots they are and blemishes, reveling themselves with their own deceivings while they feast with you;

If we confess our sins, he is faithful and just to forgive us our sins, and to cleanse us from all unrighteousness.