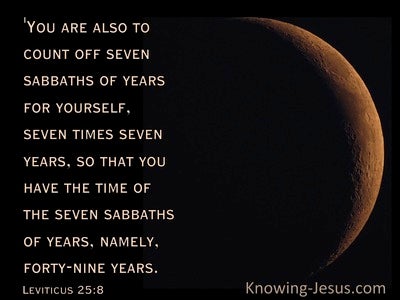 "Count for yourselves seven years of Sabbaths seven times seven years. This set of seven weeks of years total 49 years for you. Sound a horn on the tenth day of the seventh month of this fiftieth year. Likewise, on the Day of Atonement, sound the horn throughout your land. Set aside and consecrate the fiftieth year to declare liberty throughout the land for all of its inhabitants. It is to be a jubilee for you. Every person is to return to his own land that he has inherited. Likewise, every person is to return to his tribe. read more.
The fiftieth year is to be a year of jubilee for you. You are not to sow or harvest the spilled kernels that grow of themselves or pick grapes from the untrimmed vines because it's the jubilee it's sacred for you. But you may eat its produce from the field.

He was sixteen years old when he began to reign, and he reigned 52 years in Jerusalem. His mother's name was Jecoliah; she was from Jerusalem.

Uzziah was sixteen years old when he became king, and he reigned for 52 years in Jerusalem. His mother's name was Jecholiah. She was from Jerusalem.

Manasseh began to reign at the age of twelve, and he reigned for 55 years in Jerusalem. His mother was named Hephzibah.

Manasseh began to reign at the age of twelve years, and continued to reign for 55 years in Jerusalem.

Isaiah 7:8
Verse Concepts
Northern Kingdom Of Israelsyriadamascus
The Prophecy Towards DamascusPeople Passing Away

Because Aram's head is Damascus, and Rezin is its king, within sixty-five years Ephraim will be shattered as a people.