8 Bible Verses about Action For A Long Time 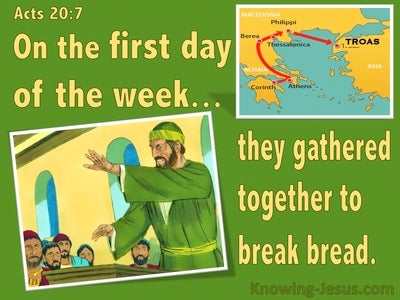 On the first day of the week, when we had met to break bread, Paul, who was going away the next morning, was preaching to them, and prolonged his discourse till midnight.

Then he went upstairs again, broke bread, and took some food; and after a long conversation which was continued till daybreak, at last he parted from them.

and who swallow up the property of widows and then mask their wickedness by making long prayers: these men will receive far heavier punishment."

Here, on landing, He was met by one of the townsmen who was possessed by demons--for a long time he had not put on any garment, nor did he live in a house, but in the tombs.

Jesus saw him lying there, and knowing that he had been a long time in that condition, He asked him, "Do you wish to have health and strength?"

and I will say to my life, "'Life, you have ample possessions laid up for many years to come: take your ease, eat, drink, enjoy yourself.'

"'All these years,' replied the son, 'I have been slaving for you, and I have never at any time disobeyed any of your orders, and yet you have never given me so much as a kid, for me to enjoy myself with my friends;

And, after a few days, He appeared to the people who had gone up with Him from Galilee to Jerusalem and are now witnesses concerning Him to the Jews.