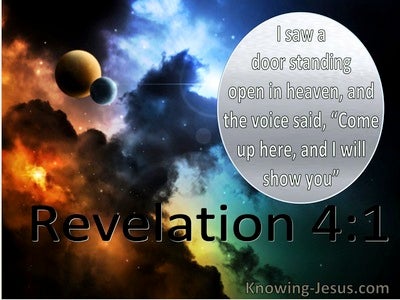 And that likeness put forth his hand and took me by the locks of my head; and the Spirit lifted me up between the heaven and the earth and brought me in the visions of God to Jerusalem, to the door of the inner gate that looks toward the north where the habitation of the image of jealousy was, which provokes to jealousy.

And when they were come up out of the water, the Spirit of the Lord caught away Philip, so that the eunuch saw him no more, and he went on his way rejoicing.

Then they willingly received him into the ship, and immediately the ship was at the land where they went.

Ye know that when ye were Gentiles, ye went, even as ye were led, unto the dumb idols. Therefore I give you to understand, that no one speaking by the Spirit of God calls Jesus anathema and that no one can call Jesus Lord but by the Holy Spirit. Now there is dispersal of gifts, but the same Spirit.

Certainly it is not expedient for me to glory, but I will come to the visions and the revelations of the Lord. I know a man in Christ who fourteen years ago (whether in the body, I cannot tell; or whether out of the body, I cannot tell; God knows) was caught up to the third heaven. And I know such a man (whether in the body, or out of the body, I cannot tell; God knows)read more.
who was caught up into paradise and heard unspeakable words, which it is not lawful for a man to utter. Of such a one I will glory, yet of myself I will not glory, except in my weaknesses. Therefore if I should desire to glory in these things, I should not be a fool; for I would say the truth, but now I forbear lest anyone should think of me above that which he sees me to be or that he hears of me.

After these things I looked, and, behold, an open door in heaven, and the first voice which I heard, was like a trumpet that spoke with me, saying, Come up here, and I will show thee the things that need to be done after these. And immediately I was in the spirit, and, behold, a throne was set in heaven, and there was one seated upon the throne. And he that was seated was like a jasper and a sardine stone to look upon; and there was a rainbow round about the throne, in sight like unto an emerald.