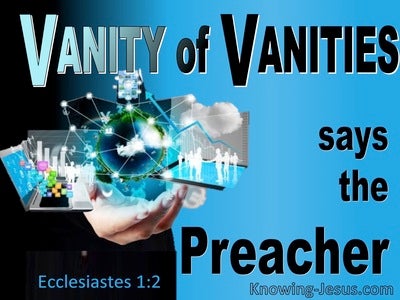 I told myself, "I will test you with pleasure, so enjoy yourself." But this was pointless. "Senseless," said I concerning laughter and pleasure, "How practical is this?" I decided to indulge in wine, while still remaining committed to wisdom. I also tried to indulge in foolishness, just enough to determine whether it was good for human beings under heaven given the short time of their lives.read more.
With respect to my extravagant works, I built houses for myself; I planted vineyards for myself. I constructed gardens and orchards for myself, and within them I planted all kinds of fruit trees. I built for myself water reservoirs to irrigate forests that produce trees. I acquired male and female slaves, and had other slaves born in my house. I also acquired for myself increasing numbers of herds and flocks more than anyone who had lived before me in Jerusalem. I also accumulated silver, gold, and the wealth of kings and their kingdoms. I gathered around me both male and female singers, along with what delights a man all sorts of mistresses. So I became great, greater than anyone who had lived before me in Jerusalem. Throughout all of this, I remained wise. Whenever I wanted something I had seen, I never refused that desire. Instead, I enjoyed everything I did, and this became the reward in what I had undertaken. Then I examined all of my accomplishments that I had brought about by my own efforts, including the work that I had labored so hard to complete and it was all pointless, like chasing after the wind, and there was nothing to be gained on earth.

But do not include younger widows on your list. For whenever their natural desires cause them to lose their devotion to the Messiah, they want to remarry. They receive condemnation because they have set aside their prior commitment to the Messiah. At the same time, they also learn how to be lazy while going from house to house. Not only this, but they even become gossips and keep busy by interfering in other people's lives, saying things they should not say.

Proverbs 19:15
Verse Concepts
slothhungerIdleness Leads ToIdlenessSlothfulnessSleep, Physical
The Love Of SleepSluggardsSloth, Leads ToWork, And The FallIdleness, Consequences OfWorking Hard And Not Being Lazy

Laziness puts one to sleep, and an idle person will go hungry.

When he went out about nine o'clock, he saw others standing in the marketplace without work.