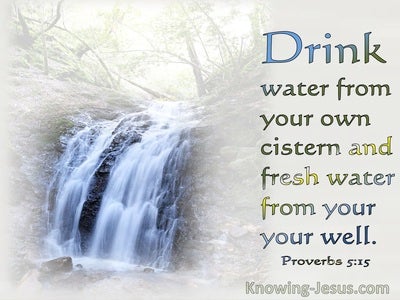 Since he had many cattle both in the Judean foothills and the plain, he built towers in the desert and dug many wells. And since he was a lover of the soil, he had farmers and vinedressers in the hills and in the fertile lands.

“Don’t listen to Hezekiah, for this is what the king of Assyria says: ‘Make peace with me and surrender to me. Then every one of you may eat from his own vine and his own fig tree, and every one may drink water from his own cistern

Don’t listen to Hezekiah, for this is what the king of Assyria says: “Make peace with me and surrender to me. Then every one of you may eat from his own vine and his own fig tree and drink water from his own cistern

Their nobles send their servants for water.
They go to the cisterns;
they find no water;
their containers return empty.
They are ashamed and humiliated;
they cover their heads.

So they took Jeremiah and dropped him into the cistern of Malchiah the king’s son, which was in the guard’s courtyard, lowering Jeremiah with ropes. There was no water in the cistern, only mud, and Jeremiah sank in the mud. But Ebed-melech, a Cushite court official employed in the king’s palace, heard Jeremiah had been put into the cistern. While the king was sitting at the Benjamin Gate, Ebed-melech went from the king’s palace and spoke to the king: read more.
“My lord the king, these men have been evil in all they have done to Jeremiah the prophet. They have dropped him into the cistern where he will die from hunger, because there is no more bread in the city.” So the king commanded Ebed-melech, the Cushite, “Take from here 30 men under your authority and pull Jeremiah the prophet up from the cistern before he dies.” So Ebed-melech took the men under his authority and went to the king’s palace to a place below the storehouse. From there he took old rags and worn-out clothes and lowered them by ropes to Jeremiah in the cistern. Ebed-melech the Cushite cried out to Jeremiah, “Place these old rags and clothes between your armpits and the ropes.” Jeremiah did so, and they pulled him up with the ropes and lifted him out of the cistern, but he continued to stay in the guard’s courtyard.

They said to one another, “Here comes that dreamer! Come on, let’s kill him and throw him into one of the pits. We can say that a vicious animal ate him. Then we’ll see what becomes of his dreams!” When Reuben heard this, he tried to save him from them. He said, “Let’s not take his life.”read more.
Reuben also said to them, “Don’t shed blood. Throw him into this pit in the wilderness, but don’t lay a hand on him”—intending to rescue him from their hands and return him to his father. When Joseph came to his brothers, they stripped off his robe, the robe of many colors that he had on. Then they took him and threw him into the pit. The pit was empty; there was no water in it.

On the second day after he had killed Gedaliah, when no one knew yet, 80 men came from Shechem, Shiloh, and Samaria who had shaved their beards, torn their garments, and gashed themselves, and who were carrying grain and incense offerings to bring to the temple of the Lord. Ishmael son of Nethaniah came out of Mizpah to meet them, weeping as he came. When he encountered them, he said: “Come to Gedaliah son of Ahikam!” read more.
But when they came into the city, Ishmael son of Nethaniah and the men with him slaughtered them and threw them into a cistern.

As for you,
because of the blood of your covenant,
I will release your prisoners
from the waterless cistern.

For My people have committed a double evil:
They have abandoned Me,
the fountain of living water,
and dug cisterns for themselves,
cracked cisterns that cannot hold water.

Drink water from your own cistern,
water flowing from your own well. Should your springs flow in the streets,
streams of water in the public squares? They should be for you alone
and not for you to share with strangers.read more.
Let your fountain be blessed,
and take pleasure in the wife of your youth. A loving doe, a graceful fawn—
let her breasts always satisfy you;
be lost in her love forever.

So they took Jeremiah and dropped him into the cistern of Malchiah the king’s son, which was in the guard’s courtyard, lowering Jeremiah with ropes. There was no water in the cistern, only mud, and Jeremiah sank in the mud.