16 Bible Verses about Crossing To The Other Side 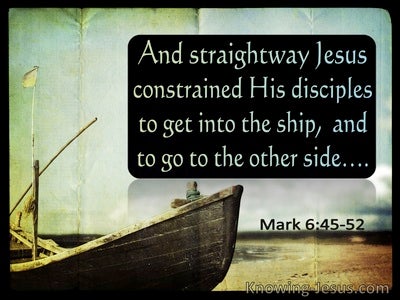 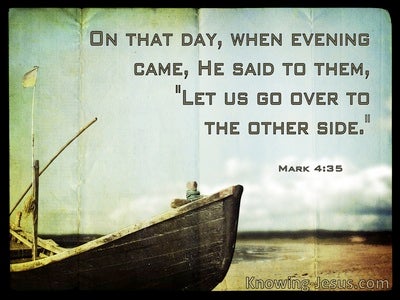 One day Jonathan told his armor bearer, "Come, let's go over to the Philistine garrison which is on the other side," but he did not tell his father.

Jonathan told his armor bearer, "Come, let's go over to the garrison of these uncircumcised ones. Perhaps the LORD will work for us, since nothing prevents the LORD from delivering, whether by many or by a few."

"Be silent, you inhabitants of the coast, you merchants of Sidon, whose messengers crossed over the sea,

When Jesus saw the large crowds around him, he gave orders to cross to the other side of the Sea of Galilee.

After getting into a boat, Jesus crossed to the other side and came to his own city.

When Jesus again had crossed to the other side in a boat, a large crowd gathered around him by the seashore.

Leaving them, he got into a boat again and crossed to the other side.

Jesus immediately had the disciples get into a boat and cross to the other side ahead of him, while he sent the crowds away.

Jesus immediately had his disciples get into a boat and cross to Bethsaida ahead of him, while he sent the crowd away.

got into a boat, and started across the sea to Capernaum. Darkness had already fallen, and Jesus had not yet come to them.

They crossed over and came ashore at Gennesaret.

Mark 4:35
Verse Concepts
The Crosslakes
Passing OverEvenings For Jesus And His Disciples

That day, when evening had come, he told them, "Let's cross to the other side."

One day, Jesus and his disciples got into a boat. He told them, "Let's cross to the other side of the lake." So they started out.

After this, Jesus went away to the other side of the Sea of Galilee (that is, to Tiberias).

After Jesus had said all of this, he went with his disciples across the Kidron valley to a place where there was a garden, which he and his disciples entered.

"How terrible it will be for you, scribes and Pharisees, you hypocrites! You travel over land and sea to make a single convert, and when this happens you make him twice as fit for hell as you are.