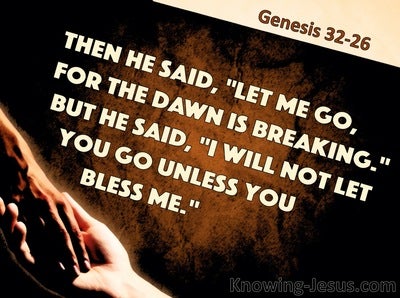 And Jacob was left alone, and a man wrestled with him until the breaking of the day.

Ruth 3:14
Verse Concepts
Do Not TellNot Recognising People
Until Daybreak

And she lay at his feet until the morning, and she rose up before one could know another. And he said, Let it not be known that the woman has come to the threshing floor.

Come, let us take our fill of love until the morning; let us solace ourselves with loves.

2 Kings 7:9
Verse Concepts
We Have SinnedThose Who Did Not TellDoing The Right ThingGood News
Until Daybreakevangelists, identity ofevangelism, nature ofGood Tidings

Then they said one to another, We do not well; this day is a day to give good tidings, and we are silent; if we tarry until the morning light, we shall be taken in the iniquity. Now, therefore, come, that we may enter in and give the news in the king's house.

Then David arose and all the people that were with him, and they passed over the Jordan before the morning light; there lacked not one of them that was not gone over the Jordan.

Let the stars of its dawn be darkened; they waited for light, but have none; neither let them see the dawning of the day;

When he therefore was come up again and had broken bread and eaten and talked a long while, even until day break, thus he departed.

God is in the midst of her; she shall not be moved; God shall help her, as the morning dawns.

Psalm 104:22
Verse Concepts
Lying Down To Rest
At Daybreak

The sun arises, they withdraw and lay themselves down in their dens.

And when the morning arose, then the angels hastened Lot, saying, Arise, take thy wife and thy two daughters who are here; lest thou be consumed in the iniquity of the city.

And he said, Let me go, for the day breaks. And he said, I will not let thee go except thou bless me.

The sun was rising upon the earth when Lot entered into Zoar.

And as he passed over Penuel, the sun rose upon him, and he limped upon his thigh.

As soon as the morning was light, the men were sent away, they and their asses.

And Moses stretched forth his hand over the sea, and the sea returned in its strength when the morning appeared; and the Egyptians fled against it; and the LORD overthrew the Egyptians in the midst of the sea.

Therefore, the king arose very early in the morning at dawn and went in haste unto the den of lions.

Then the woman came, in the dawning of the day, and fell down at the door of the man's house where her lord was until it was light.

So shall Bethel do unto you because of your great wickedness; in the morning the king of Israel shall utterly be cut off.

But God also prepared a worm when the morning rose the next day, and it smote the gourd so that it withered.

And as soon as it was day, the elders of the people and the princes of the priests and the scribes came together and led him into their council, saying,

Now well along on the sabbath, as it began to dawn on the first of the sabbaths, came Mary Magdalene and the other Mary to see the sepulchre.

And very early in the morning the first of the sabbaths, they come unto the sepulchre at the rising of the sun.

Now upon the first of the sabbaths, very early in the morning they came unto the sepulchre, bringing the spices which they had prepared, and certain others with them.

But when the morning was now come, Jesus stood on the shore, but the disciples did not understand that it was Jesus.

Acts 5:21
Verse Concepts
Disciples In The TempleBringing People Out Of Other PlacesTeaching In The ChurchAt Daybreak
elders, as community leadersSanhedrinTeachers

And when they heard that, they entered into the temple early in the morning and taught. In the meantime, the prince of the priests came, and those that were with him, and called the council together and all the elders of the sons of Israel, and sent to the prison to have them brought.

And when it was day, the magistrates sent the sergeants, saying, Let those men go.

O satisfy us early with thy mercy, and we shall sing and be glad all our days.

Until the day breaks and the shadows flee away, return, my beloved, and be thou like a roe or a young hart upon the mountains of Bether.