7 Bible Verses about Dimness Of Vision 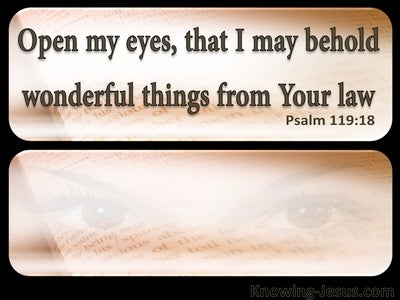 Consider and answer me, O Lord my God; lighten the eyes [of my faith to behold Your face in the pitchlike darkness], lest I sleep the sleep of death,

Open my eyes, that I may behold wondrous things out of Your law.

When Isaac was old and his eyes were dim so that he could not see, he called Esau his elder son, and said to him, My son! And he answered him, Here I am.

Now Israel's eyes were dim from age, so that he could not see. And Joseph brought them near to him, and he kissed and embraced them.

At that time Eli, whose eyesight had dimmed so that he could not see, was lying down in his own place.

Now Eli was 98 years old; his eyes were dim so that he could not see.

In the day when the keepers of the house [the hands and the arms] tremble, and the strong men [the feet and the knees] bow themselves, and the grinders [the molar teeth] cease because they are few, and those who look out of the windows [the eyes] are darkened;