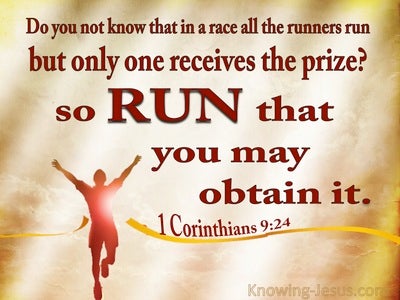 I considered and observed on earth the following: The race doesn't go to the swift, nor the battle to the strong, nor food to the wise, nor wealth to the smart, nor recognition to the skilled. Instead, timing and circumstances meet them all.

Saul and Jonathan, loved and handsome in life, in death were not separated. Swifter than eagles they were, and more valiant than lions.

Zeruiah's three sons Joab, Abishai, and Asahel were there. As a runner, Asahel was fast, like one of the wild gazelles.

Mighty and experienced warriors from the descendants of Gad joined David at his wilderness stronghold. They were expert handlers of both shield and spear, with hardened looks and as agile as a gazelle on a mountain slope.

"My days pass faster than a runner; but they pass quickly without seeing anything good.

The skilled archer will not be able to stand, the swift runner will not survive, and the mounted rider will not preserve his own life.

You know that in a race all the runners run but only one wins the prize, don't you? You must run in such a way that you may be victorious.