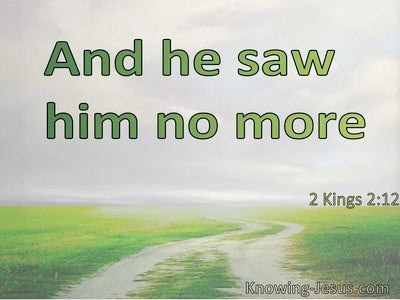 And it cometh to pass, they are going, going on and speaking, and lo, a chariot of fire, and horses of fire, and they separate between them both, and Elijah goeth up in a whirlwind, to the heavens.

And Elisha prayeth, and saith, 'Jehovah, open, I pray Thee, his eyes, and he doth see;' and Jehovah openeth the eyes of the young man, and he seeth, and lo, the hill is full of horses and chariots of fire, round about Elisha.

And Elisha is seeing, and he is crying, 'My father, my father, the chariot of Israel, and its horsemen;' and he hath not seen him again; and he taketh hold on his garments, and rendeth them into two pieces.

And Elisha hath been sick with his sickness in which he dieth, and come down unto him doth Joash king of Israel, and weepeth on his face, and saith, 'My father, my father, the chariot of Israel, and its horsemen.'

The chariots of God are myriads, thousands of changes, The Lord is among them, in Sinai, in the sanctuary.

and for the altar of perfume refined gold by weight, and for the pattern of the chariot of the cherubs of gold -- spreading and covering over the ark of the covenant of Jehovah.

For, lo, Jehovah in fire cometh, And as a hurricane His chariots, To refresh in fury His anger, And His rebuke in flames of fire.

Who is laying the beam of His upper chambers in the waters, Who is making thick clouds His chariot, Who is walking on wings of wind,

Lo, as clouds he cometh up, And as a hurricane his chariots, Lighter than eagles have been his horses, Woe to us, for we have been spoiled.

Against rivers hath Jehovah been wroth? Against rivers is Thine anger? Against the sea is Thy wrath? For Thou dost ride on Thy horses -- Thy chariots of salvation?

Zechariah 6:1
Verse Concepts
Two Other ThingsFour Other ThingsVisions And Dreams In Scripture
BrassThings Like Bronze

And I turn back, and lift up mine eyes, and look, and lo, four chariots are coming forth from between two of the mountains, and the mountains are mountains of brass.