11 Bible Verses about Her Strength 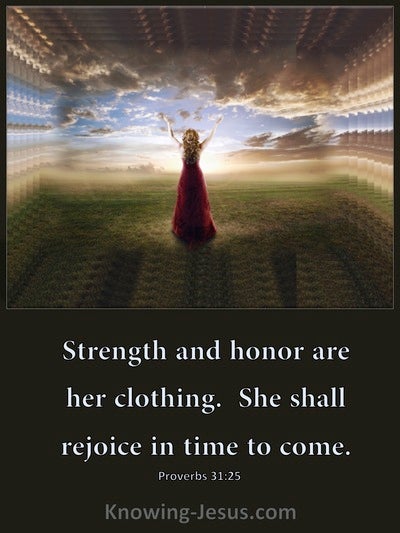 Strength and dignity are her garments; she smiles about the future.

Sudan was her source of strength, along with Egypt there were no limits. Put and the Libyans were her allies.

Though Babylon should reach up to the heavens and fortify her high fortresses, from me destroyers will come to her," declares the LORD.

By faith Sarah, even though she was old and barren, received the strength to conceive, because she was convinced that the one who had made the promise was faithful.

She clothes herself with fortitude, and fortifies her arms with strength.

It will be a dark day for Tahpanhes when I break the yokes of Egypt. That's when her arrogant power will come to an end. She'll be covered by a cloud, and her citizens will go into captivity.

Ezekiel 33:28
Verse Concepts
The Proud Will Be AbasedThe Mountains Of Israel
Destruction Of CountriesLand Becoming Empty

Then I'll turn the land into a desolate ruin and her arrogant strength will come to an abrupt end. The mountains of Israel will become so desolate that no one will be able to travel over them."

Since God is in her midst, she will not be shaken. God will help her at the break of dawn.

Ezekiel 38:9
Verse Concepts
StormsCovering The Earth
The Storms Of Life

You'll arise suddenly, like a tornado, coming like a windstorm to cover the land, you and all your soldiers with you, along with many nations."'"

Take note of her ramparts; investigate her citadels; that you may speak about them to the next generation.

She clothes herself with fortitude, and fortifies her arms with strength. She is confident that her profits are sufficient. Her lamp does not go out at night.