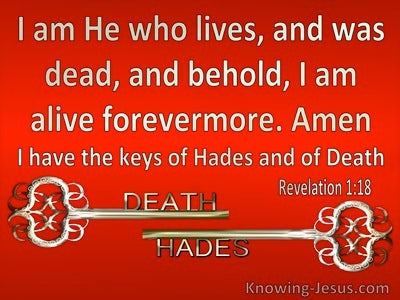 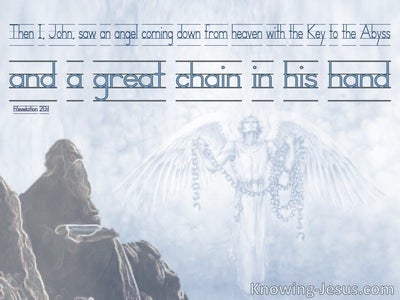 And I have placed the key Of the house of David on his shoulder, And he hath opened, and none is shutting, And hath shut, and none is opening.

And the fifth messenger did sound, and I saw a star out of the heaven having fallen to the earth, and there was given to it the key of the pit of the abyss,

and round about the house of God they lodge, for on them is the watch, and they are over the opening, even morning by morning.

added also this to all, that he shut up John in the prison.

Luke 11:7
Verse Concepts
Not Able To Get UpUnable To Do Other ThingsLeave Us Alone
Shutting DoorsBedroomsBeds

and he from within answering may say, Do not give me trouble, already the door hath been shut, and my children with me are in the bed, I am not able, having risen, to give to thee.

It being, therefore, evening, on that day, the first of the sabbaths, and the doors having been shut where the disciples were assembled, through fear of the Jews, Jesus came and stood in the midst, and saith to them, 'Peace to you;'

saying -- 'The prison indeed we found shut in all safety, and the keepers standing without before the doors, and having opened -- within we found no one.'

And I saw a messenger coming down out of the heaven, having the key of the abyss, and a great chain over his hand, and he laid hold on the dragon, the old serpent, who is Devil and Adversary, and did bind him a thousand years, and he cast him to the abyss, and did shut him up, and put a seal upon him, that he may not lead astray the nations any more, till the thousand years may be finished; and after these it behoveth him to be loosed a little time.

And hath been the stedfastness of thy times, The strength of salvation, wisdom, and knowledge, Fear of Jehovah -- it is His treasure.

Matthew 13:52
Verse Concepts
People Of The KingdomtrainingChristian Traditions
HousesNewTeachers Of The Law

And he said to them, 'Because of this every scribe having been discipled in regard to the reign of the heavens, is like to a man, a householder, who doth bring forth out of his treasure things new and old.'

Galatians 3:23
Verse Concepts
Under The Law

And before the coming of the faith, under law we were being kept, shut up to the faith about to be revealed,

'Woe to you, the lawyers, because ye took away the key of the knowledge; yourselves ye did not enter; and those coming in, ye did hinder.'

And they stay till confounded, and lo, he is not opening the doors of the upper chamber, and they take the key, and open, and lo, their lord is fallen to the earth -- dead.

and he did open the pit of the abyss, and there came up a smoke out of the pit as smoke of a great furnace, and darkened was the sun and the air, from the smoke of the pit.

Keys Of Death And Hades