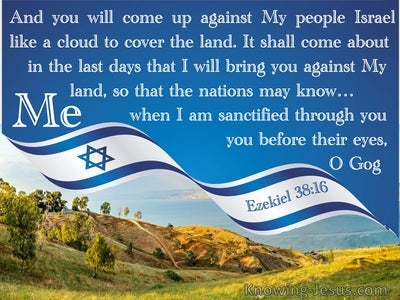 When there is famine in the land or pestilence or blasting or mildew or locusts or caterpillars, if their enemy besieges them in the land of their gates, whatever plague, whatever sickness there is,

The arches have sorely grieved him and shot at him and hated him;

For a people has come up upon my land, strong, and without number, whose teeth are the teeth of a lion, and he has the molars of a great lion.

And they shall waste the land of Assyria with the blade, and the land of Nimrod with their swords; and he shall deliver us from the Assyrian when he comes against our land and when he treads within our borders.

When I heard, my belly trembled; my lips quivered at the voice; rottenness entered into my bones, and I trembled in my seat, that I might rest in the day of trouble when he comes up unto the people to destroy them.

And Jacob said to Simeon and Levi, Ye have troubled me to make me to stink among the inhabitants of the land, among the Canaanites and the Perizzites; and I being few in number, they shall gather themselves together against me and slay me; and I shall be destroyed, I and my house.

Then Nahash, the Ammonite, came up and encamped against Jabeshgilead. And all the men of Jabesh said unto Nahash, Make a covenant with us, and we will serve thee.

So Benhadad hearkened unto King Asa and sent the princes of the hosts, which he had against the cities of Israel, and smote Ijon and Dan and Abelbethmaachah and all Cinneroth, with all the land of Naphtali.

Then Benhadad, the king of Syria, gathered all his host together; and there were thirty-two kings with him and horses and chariots; and he went up and besieged Samaria and warred against it.

And it came to pass after this, that Benhadad, king of Syria, gathered all his host and went up and besieged Samaria.

Then the king of Assyria came up throughout all the land and went up to Samaria and besieged it three years.

And it came to pass at the return of the year, that Benhadad numbered the Syrians and went up to Aphek, to fight against Israel.

And in the fourth year of king Hezekiah, which was the seventh year of Hosea, son of Elah, king of Israel, Shalmaneser, king of Assyria, came up against Samaria and besieged it.

So he sent horsemen and chariots there and a great host, who came by night and compassed the city about.

Then Amalek came and fought with Israel in Rephidim.

And when King Arad, the Canaanite, who dwelt toward the Negev, heard tell that Israel came by the way of the sentinels; then he fought against Israel and took some of them prisoners.

Come up unto me and help me that we may smite Gibeon; for it has made peace with Joshua and with the sons of Israel. Therefore, the five kings of the Amorites, the king of Jerusalem, the king of Hebron, the king of Jarmuth, the king of Lachish, the king of Eglon, gathered themselves together and went up, they and all their hosts and encamped before Gibeon and made war against it.

Now it came to pass in the fourteenth year of king Hezekiah that Sennacherib king of Assyria came up against all the defenced cities of Judah and took them.

And three companies came out of the camp of the Philistines to destroy the land. One company turned unto the way that leads to Ophrah unto the land of Shual.

O God, the Gentiles are come into thine inheritance; they have defiled the temple of thy holiness; they have laid Jerusalem on heaps.

Behold, I will bring a nation upon you from afar, O house of Israel, saith the LORD; it is a mighty nation, it is an ancient nation, a nation whose language thou dost not know, neither dost thou understand what they say.

After many days thou shalt be visited; at the end of years thou shalt come to the land broken by the sword, gathered out of many peoples, to the mountains of Israel, which have been always waste; but she is brought forth out of the nations, and they shall dwell safely all of them. Thou shalt ascend and come like a storm; thou shalt be like a cloud to cover the land, thou, and all thy companies and many peoples with thee.

Ezekiel 38:16
Verse Concepts
Mission, Of IsraelEnd Of The World
Covering The Earth

and thou shalt come up against my people of Israel as a cloud to cover the land; it shall be at the end of the days, and I will bring thee upon my land, that the Gentiles may know me, when I shall be sanctified in thee, O Gog, before their eyes.

Jeremiah 4:16
Verse Concepts
Telling Of MovementsPeople From Far Away
Attacks On Jerusalem ForetoldVoices

Say ye of the Gentiles; behold, cause it to be heard upon Jerusalem, Watchmen come from a far country and shall give out their voice upon the cities of Judah.

Now thou shalt be besieged by armies, O daughter of the army: he shall lay siege against us; they shall smite the judge of Israel with a rod upon the cheek.

Beth He has built against me and compassed me with gall and travail.