20 Bible Verses about Other Unimportant People 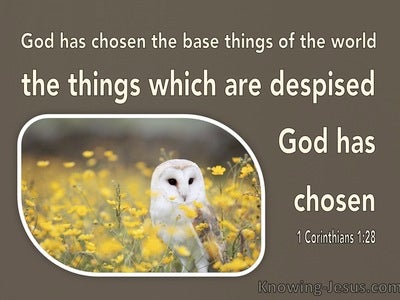 By sentence of the watchmen is the matter resolved, and the case by the word of the holy ones to the intent that the living may know that the most High takes rule over the kingdom of men and gives it to whoever he will and sets up over it the man who is the lowest.

Behold, I have made thee small among the Gentiles: thou shalt be greatly humbled.

The disciple is not above his master, nor the slave above his lord.

So then neither is he that plants anything, neither he that waters, but God that gives the increase.

Rather, O man, who art thou to reply against God? Shall the thing formed say to him that formed it, Why hast thou made me thus?

For which cause both thou and all thy company are gathered together against the LORD, for what is Aaron, that ye murmur against him?

And Gaal, the son of Ebed, said, Who is Abimelech and who is Shechem that we should serve him? Is he not the son of Jerubbaal? And is not Zebul his deputy? Serve the men of Hamor, the father of Shechem. For why should we serve him?

Then Zebul said unto him, Where is now thy mouth, with which thou didst say, Who is Abimelech that we should serve him? Is not this the people that thou hast despised? Go out now and fight with them.

Then David spoke to the men that stood by him, saying, What shall be done to the man that overcomes this Philistine and takes away the reproach from Israel? For who is this uncircumcised Philistine that he should dishonour the armies of the living God?

1 Samuel 25:10
Verse Concepts
I Am UnimportantEscaping From PeopleWho Is This?
Contempt, Examples OfInhospitalityDisloyalty

And Nabal answered David's slaves and said, Who is David? And who is the son of Jesse? There are many slaves nowadays that break from their masters.

Isaiah 41:14
Verse Concepts
Do Not Fear For God Will HelpwormsbugsTypesNames And Titles For Christ
Man, Insignificance OfGod, As RedeemerMaggotsRedemption, In Ot

Fear not, thou worm Jacob, ye dead of Israel; I will help thee, saith the LORD and thy Redeemer, the Holy One of Israel.

by loving those who hate thee and hating thy friends. For thou hast declared this day that thou dost not regard thy princes nor thy slaves. For this day I perceive that if Absalom had lived and we had all died today, then this would be right in thine eyes.

All the Gentiles are as nothing before him, and they are counted to him as vanity and as less than nothing.

And I will turn to bring again the captives of Egypt and will cause them to return into the land of Pathros into the land of their habitation, and there they shall be a minor kingdom. In comparison with the other kingdoms it shall be humble; neither shall it exalt itself any more above the nations: for I will diminish them that they shall no longer rule among the Gentiles.

They shall call the princes thereof, princes without a kingdom; and all her great ones shall be nothing.

The small one shall be as a thousand; the youngest as a strong nation; I the LORD will hasten it in its time.