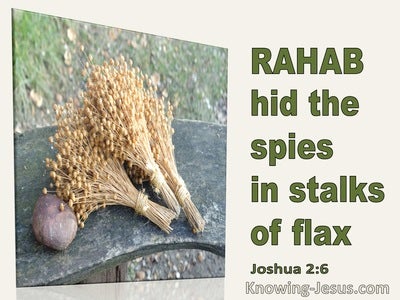 And the woman conceived, and bore a son. And she saw him that he was fair, and hid him three months.

By faith Moses, being born, was hid three months by his parents, because they saw the child beautiful; and they did not fear the injunction of the king.

And we boiled my son, and ate him: and I said to her on the next day, Give thy son, that we may eat him; and she has hidden her son.

But Jehosheba, the daughter of king Joram, the sister of Ahaziah, took Joash the son of Ahaziah and stole him from among the king's sons that were slain, and hid him and his nurse in the bedchamber; and they hid him from Athaliah, so that he was not slain. And he was with her hid in the house of Jehovah six years. And Athaliah reigned over the land.

And the woman had taken and concealed the two men; and she said, Yes, the men did come unto me, but I knew not whence they were;

But she had taken them up to the roof, and secreted them under the stalks of flax, which she had laid out on the roof.

And the city shall be accursed, it and all that is in it, to Jehovah; only Rahab the harlot shall live, she and all that are with her in the house, because she hid the messengers that we sent.

Joshua 6:25
Verse Concepts
Where People Live To This Daywhores
Faithfulness, In Human RelationshipsSpying

And Joshua saved alive Rahab the harlot, and her father's household, and all that she had, and she dwelt in the midst of Israel to this day; because she hid the messengers whom Joshua had sent to spy out Jericho.

And the woman took and spread the covering over the well's mouth, and spread ground corn on it; and the thing was not known.

and it was so, when Jezebel cut off the prophets of Jehovah, that Obadiah took a hundred prophets, and hid them by fifty in a cave, and maintained them with bread and water);

Was it not told my lord what I did when Jezebel slew the prophets of Jehovah, how I hid a hundred men of Jehovah's prophets by fifty in a cave, and maintained them with bread and water?

Bring in counsel, execute justice; make thy shadow as the night in the midst of noonday; hide the outcasts, discover not the fugitive. Let mine outcasts dwell with thee, Moab; be thou a covert to them from the face of the waster. For the extortioner is at an end, the wasting hath ceased, the oppressors are consumed out of the land.

Hide them in the dust together; bind their faces in secret.