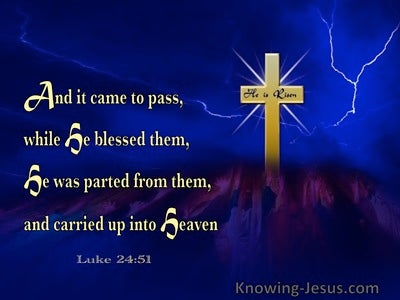 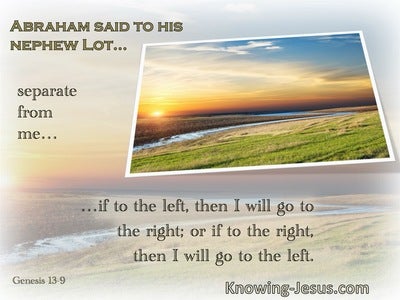 So Lot chose the Plain of the Jordan for himself. Lot traveled east, and they separated themselves the one from the other.

Yahweh said to Abram, after Lot was separated from him, "Now, lift up your eyes, and look from the place where you are, northward and southward and eastward and westward,

and Mizpah, for he said, "Yahweh watch between me and you, when we are absent one from another.

Esau took his wives, his sons, his daughters, and all the members of his household, with his livestock, all his animals, and all his possessions, which he had gathered in the land of Canaan, and went into a land away from his brother Jacob.

Depart! they cried to them, Unclean! depart, depart, don't touch! When they fled away and wandered, men said among the nations, They shall no more live [here].

It happened, while he blessed them, that he withdrew from them, and was carried up into heaven.

Then the contention grew so sharp that they separated from each other. Barnabas took Mark with him, and sailed away to Cyprus,

But to the married I command -- not I, but the Lord -- that the wife not leave her husband

So that they are no more two, but one flesh. What therefore God has joined together, don't let man tear apart."

What therefore God has joined together, let no man separate."

An unfriendly man pursues selfishness, and defies all sound judgment.

Moses said, "You have spoken well. I will see your face again no more."

"Now, behold, I know that you all, among whom I went about preaching the Kingdom of God, will see my face no more.

For perhaps he was therefore separated from you for a while, that you would have him forever,