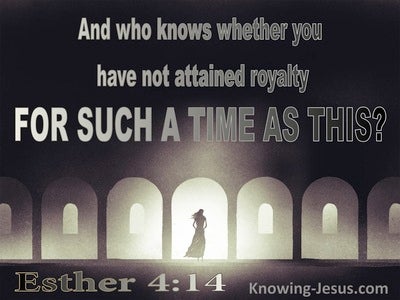 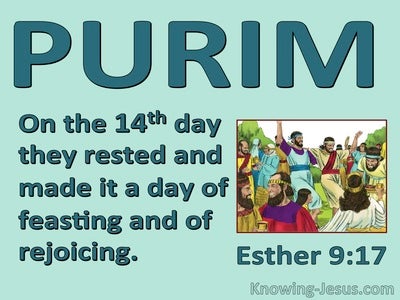 For if thou altogether holdest thy peace at this time, then shall there arise relief and deliverance to the Jews from another place; but thou and thy father's house shall perish. And who knows whether thou art not come to the kingdom for such a time as this?

So they hanged Haman on the gallows that he had prepared for Mordecai. And the king's wrath was appeased.

stating that the king granted the Jews that were in every city to gather themselves together, and to stand for their life, to destroy, to slay, and to cause to perish, all the power of the people and province that might assault them, their little ones and women, and to take the spoil of them for a prey,

Therefore they called these days Purim after the name of Pur. Therefore, according to all the words of this letter, and for what they had seen concerning this matter and what had happened to them,

And Mordecai wrote these things, and sent letters to all the Jews near and far that were in all the provinces of king Ahasuerus, to establish this among them, that they should keep the fourteenth day of the month Adar, and the fifteenth day of the same, yearly, as the days on which the Jews rested from their enemies, and the month that was turned to them from sorrow to joy, and from mourning into a good day; that they should make them days of feasting and joy, and of sending portions one to another, and gifts to the poor. read more.
And the Jews undertook to do as they had begun, and as Mordecai had written to them. For Haman the son of Hammedatha the Agagite, the oppressor of all the Jews, had devised against the Jews to destroy them, and had cast Pur, that is, the lot, to consume them and to destroy them; and when Esther came before the king, he commanded by letters that his wicked device, which he had devised against the Jews, should return upon his own head; and they hanged him and his sons on the gallows. Therefore they called these days Purim after the name of Pur. Therefore, according to all the words of this letter, and for what they had seen concerning this matter and what had happened to them, the Jews ordained and took upon them, and upon their seed, and upon all such as joined themselves to them, so that it should not fail, that they would observe these two days according to their writing and according to their fixed time, every year; and that these days should be remembered and observed throughout every generation, in every family, every province, and every city, and that these days of Purim should not fail from among the Jews, nor the memorial of them cease from among their seed. And queen Esther the daughter of Abihail, and Mordecai the Jew, wrote with all authority to confirm this second letter of Purim. And he sent letters to all the Jews, to the hundred and twenty-seven provinces of the kingdom of Ahasuerus, words of peace and truth, to confirm these days of Purim in their fixed times, according as Mordecai the Jew and queen Esther had enjoined them, and as they had decreed for themselves and for their seed, as to the matters of the fastings and their cry. And the decree of Esther confirmed these matters of Purim; and it was written in the book.